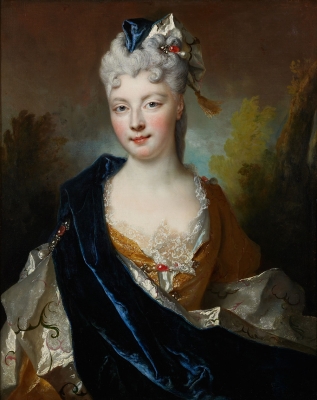 A charming lady look at us, dressed in a brocade gown and velvet cloak that is held together with a brooch.
The painter Nicolas de Largilliere (Paris 1656-1746) was the society painter of the eighteenth century. With his portraits he caught an image of the flourishing society under the reign of Louis XIV and XV. This picture is a typical example of a fashionable portrait of Larguilliere in the beginning of the early seventeenhundreds. We know from contracts that the price for a portrait like this, without depiction of the hands, the artist demanded 600 livres.


It is quite difficult though, to identify the ladies he painted, because he reduced and embellished the faces of his clients to satisfy their vanity. This approach of portrayal was a common practice of the era. The famous art critic Roger de Piles ascertained in ‘Cour de Peinture par Principe’ that particularly women were less tolerant of realism when they were to be portrayed. (Cour de Peinture, 1706)
This painting is a characteristic work of the master in a compostion he repeatedly used during his career, with or without hands. It is even very well possible that the clothes worn on the painting were owned by the artist. They happen to appear on more than one occasian in the work of the artist, as can be seen on ladies portraits in the Rau collection, the Bayrische Gemäldesammlungen in Munich and in the Museum of Fine Arts in San Francisco in different arrangements. We also see similar tranquil backdrops here.

Largilliere regularly painted several versions of a portrait, as is the case here. Next to this copy of the hand of the master, another copy of his hand is to be seen in the Musee Cognacq-Jay in Paris. A third version, from the atelier of Largilliere, can be seen in the Mayer van den Bergh Museum in Antwerp.

The identity of the lady,
Although the painting has the name of Jeanne de Robais written on the back in an elegant handwriting, it is not at all certain the portrait is hers. Repeated surveys to identify the elegant lady have failed to date. If she is Jeanne de Robais, she is the daughter of Isaac de Robais, a fabulously rich manufacturer from Abbeville. Isaac’s son Abraham was portrayed by Perroneau in 1767 in pastel. (portrait d’Abraham de Robais, 1767 Musee du Louvre R.F. 4146)
The version in the Musée Cognacq-Jay in Paris traditionaly is called portrait of Madame la Duchesse de Beaufort. She was of English nobility and portrayed during her stay in Paris. Little more of her is known. The atelier version of the painting in the Mayer van den Bergh Museum was obtained from the mayor of Oudenbosch, J.B. Klyn, in 1898. It is said that it concerns a ancestral portrait from a family of French nobility that fled France in 1795. 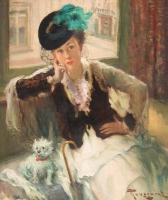 Lady in white dress with dog