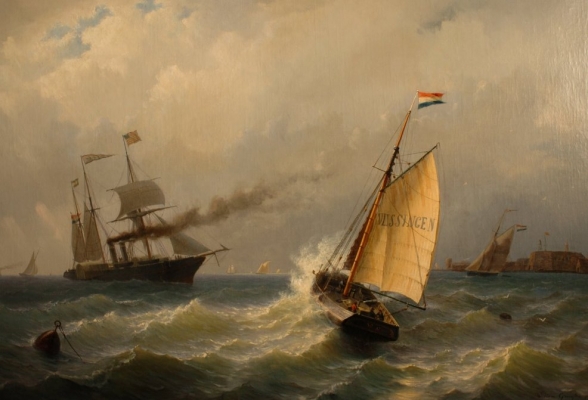 William Gruyter , Amsterdam 1817-1880
Loodskotter and steamer in the Flushing Roads , oil on canvas 90.8 x 131.8 cm . , Signed lr full, monogrammed on the stern of the ship and dated 1870.
Exhibitions : Rotterdam Academy of Fine Arts and Applied Sciences , " Exhibition of Living Masters , 1870 , Cat 164 ( as " View of the roads of Vlissingen ' ) ; Antwerp , Belgium , " Exhibition of Living Masters , Aug. -Sept . 1870 , Cat 467 ( as " Vue de l' Escaut devant Flessingue ) .
William Gruyter lived and worked in Amsterdam and was a pupil of the famous marine painter Hermanus Koekkoek Sr. Like his mentor, he painted almost exclusively marine and river views . His son Jacob William followed in his footsteps and also devoted himself to painting seascapes . In the period 1840-1880 his work in Amsterdam and The Hague was shown at the annual Exhibition of Living Masters regularly. In 1845 he became a member of the Royal Academy in Amsterdam and in 1853 the artists 'club ' Arti et Amicitiae . Several Dutch museums have work of his hand .

P17 Portrait of a man

Marius Bauer: study drawing made at the The Hague art academ...