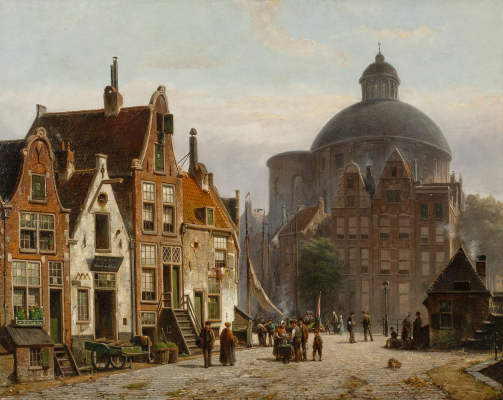 The Lutheran church in Amsterdam

Willem studied under his father Hermanus, a marine painter though adopting town scenes as his favoured subject matter, a field of painting distinct from those of the remaining members of the extended family.Willem was the only member of the family to specialise in Dutch cityscapes, with Cornelis Springer as his great example. His paintings combine historical reconstruction and fantasy. His work was very popular outside the Netherlands as it conformed tot he idealistic image peaple had of the old Dutch towns.

Willem exhibited widely, in Leeuwarden in 1859 and subsequently in Amsterdam, The Hague and Rotterdam 1865-94 almost exclusively town scenes of the Netherlands. His works can be found in museums, among others; London, National Gallery; Amsterdam, Historisch Museum and Montreal, Museum of Fine Arts. 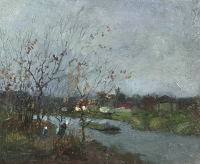 Pair or bronzes of horses with rider