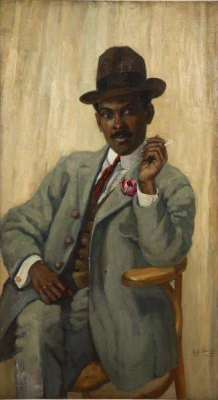 Portrait of a Dandy

Gerard Johan Staller the painter of this intriguing dandy was born in Amsterdam in the neighbourhood of the Jewish quarter in 1880. He was a student at the Rijksnormaalschool, de Quellinusschool and from 1902 until 1905 Rijksacademie under by August Allebé. His oeuvre consists of Amsterdam city views, animals and folk scenes from the Jewish Quarter.

Dandy portraits were en vogue in the 1920s and 30s. During this period western interest in colored people and black culture assumed vast proportions. A term was even devised for this phenomenon, negrophilia, meaning love of black culture, its (chief)purpose being to provoke the bourgeoisie. Avant-garde artists in Paris displayed great interest in colored individuals such as the dancer Josephine Baker, the musician Henry Crowder and the writer Langston Hughes.

At the Terras, a famous portrait of a dandy by Nola Hatterman is recently identified as Lou Drenthe, a jazz musician in Amsterdam. This painting is since 1931 in the Stedelijk Museum Amsterdam collection. At an exhibition in Amsterdam in 1930 Hatterman’s painting was praised as mondain and 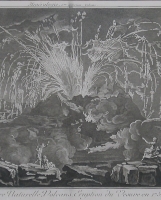 Encyclopedie: Eruption of Mount Vesuvius in 1754

Portrait of a lady, possible Anna or Maria Meulenaer 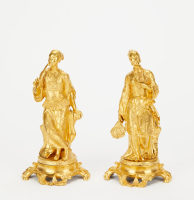