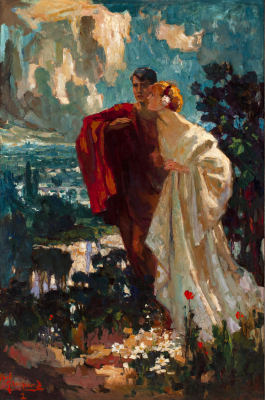 Sir Robert Archibalt Antonius Joan Graafland, better known als Rob Graafland was a well-known painter from Maastricht, the Netherlands. This painting is a beautiful self portrait of him and his wife Maria Hubertina Leopoldina Isabella Duquesne (1881-1956). This painting dates from around 1914 and Graafland and his wife are standing in a lush landscape wearing medieval clothing. The subject ‘Walk of Life’, was very dear to Graafland’s heart. He painted it at least three times of which this one is the grandest version.

The subject is influenced by poetry and music. Both had a profound influence on his life and work and the subject ‘walk of life’ was derived from the oratorio “Die Schöpfung” (The Creation) of the Austrian composer Joseph Haydn (1732-1809). “Die Schöpfung” tells in three parts of the creation of the world as is told in the Book of Genesis and it was probably part three where the happy times of Adam and Eve in the Garden of Eden are described, that inspired Graafland when he painted this painting.

The garden in this painting is the one Graafland created when he lived in Sint Pieter, a little town near Maastricht, the Netherlands. The family lived here between 1911 and 1922 which was the happiest period of Graafland. The garden resembled an Italian terraced garden with fountains, statues, meandering pathways and wrought iron benches. This created an idyllic atmosphere which was a perfect backdrop for his paintings. The garden combined with Graafland using bright and bold colors resulted in these paintings being his most beautiful works of his oeuvre. 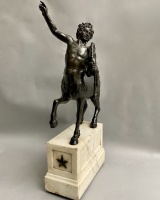 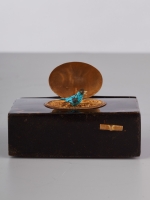 A German Singing Bird Box of Tortoiseshell appearance, circa...