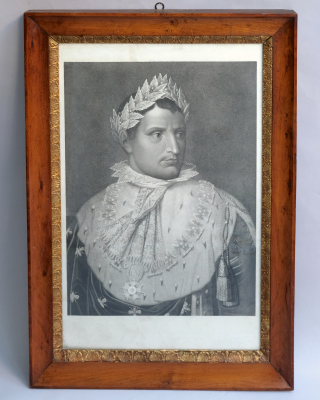 Napoleon, Empereur des Français, Roi d’Italie. Aquatint and etching with engraved lines on a large sheet of paper, in a contemporary carved wooden frame. Epreuve avant la lettre.
This aquatint seems identical to the one by Raphael (Raffaello) Morghen (1758-1833) after Stefano Tofanelli (1752-1812), published in 1807 in Florence. But where the Florence version is much smaller, ours is very large and lacks the text of the Florence print.
Lord Byron had the smaller version in his collection. That engraving hung in Byron's berdroom in Newstead Abbey. Byron commented that 'the Emperor becomes his robes as if he had been hatched in them' (Byron's diary 6 March 1814).
The paper of our etching has some tears on the edges and a restoration in the background to the right of Napoleon’s face.
Dimensions:
Frame: 66 x 92 cm
Image: 47,5 x 63 cm
Sheet circa 51 x 77 cm 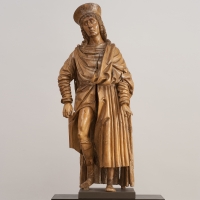