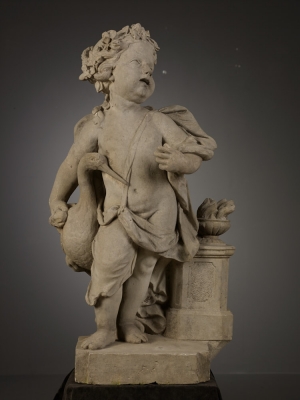 A boy embraces a stork. Next to him a fire pot on a pedestal. This rare representation could be interpreted as an allegory on love, happiness, loyalty and affection.

The stork is seen throughout as a symbol of good luck: happiness, prosperity, and affluent posterity. Because the stork returns to northern regions in spring, coming from the south, it was often seen as a symbol of fertility in conjunction with its appearance at the resurgence of nature. Nowadays, the stork is still seen as the deliverer of children. This conjunction also connects the symbol of the stork to children’s loyalty to parents.

The flame, here in the figuration of a fire pot, is a symbol of love. In art, a vase with flames or a candle in the hand of Caritas is, however, more common. Flames also represent affection and security. The putto as symbol of love is often represented in the form of a boy with wings, although the Dutch often omitted this last feature.

On prints the combination of fire and storks is of the accompanied by a nun as a representation of piety, as can be seen on an image by Philips Galle in the Rijksmuseum (inv.nr. RP-P-1966-198)

As representation of devoutness the putto is occasionally substituted by a woman with a palm branch, as can be seen on a painted wallpapering by Athonie Elliger in the mansion at Singel 116 in Amsterdam, dating from 1756. 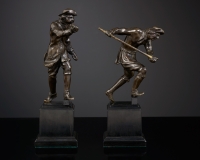 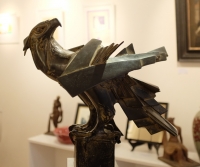