This representation of Neptune, recognizable by its lush beard, trident and wreath of waterplants, stands on a water spitting dolphin.

Neptune was the Roman god of the seas. In a seafaring nation like Holland, his image was often the subject for a sculpture in the late 17th and early 18th century. A striking example was the fountain produced in 1714 for Driemond by Ignatius van Logteren and that nowadays is situated at Frankendael at the Middenweg in Amsterdam. In 1720 van Logteren made the sculpture of Neptune that was to be placed in the ‘overtuin’ of the van Vliet family in the village of Haastrecht. An overtuin is a dutch term for a garden that was adjacent to a manor but typically situated across a road that ran in front of the estate. The sculpture still exists, although the trident has been lost in the course of time. A similar sculpture of Neptune was made by van Logteren for the overtuin of the stately home Lyndensteyn in Beetsterzwaag.

The sculpture bears no signature, but is probably made by Ignatius van Logteren. It must have been a striking image in a garden, placed near a pond or fountain. An example of such a garden with Neptune fountain can be found on a painting of the early 18th century by Isaac de Moucheron, nowadays in the Rijksmuseum.

Ignatius van Logteren (1685-1732) was a sculptor, stucco artist, and architect from Amsterdam who got his first drawing lessons from his father, the painter Jan van Logteren the elder. He received his initial sculptural training from Anthonie Turck and Johannes Blommendael. An important influence on his work was the sculptor Daniel Marot, also from Amsterdam. In 1709 van Logteren marries Hendricka Turck (1638-1751), the sister of Anthonie. He settles near the Reguliersgracht close to the workshops of other important stoneworkers and sculptors in Amsterdam. In 1718 van Logteren manages to buy his own property in Amsterdam at the Prinsengracht.
After the untimely death of Ignatius, his son Jan van Logteren (1709-1745) takes over the business he grew up with, although he had not yet been admitted master to his guild. Initially Jan is too busy finishing or executing assignments already commissioned to his father. In 1734 Jan marries and finally passes his masterwork.

At present many of the adornments to the gables of Amsterdam from the late 17th and early 18th century are still in existence, amongst which a considerable number made by the van Logterens. 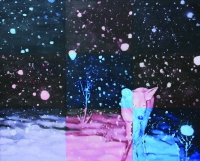