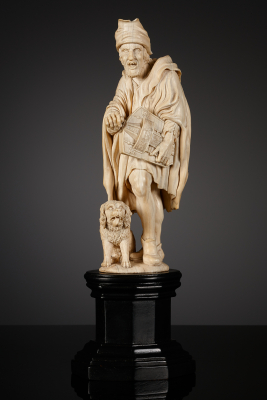 An ivory statue of an old man as a  Hurdy Gurdy player with a dog  at his feet. The man is probably blind as was usual in the hurdy gurdy iconography. In a sixteenth-century engraving of The Blind Leading the Blind for which Hieronymus Bosch is given as the inventor, the first to fall into the ditch carries along a hurdy-gurdy. In subsequent depictions itinerant musicians are unsavoury men, often represented as malicious, for instance in works by artists such as Cornelius Massys (1545), Hans Bol (c. 1561), Hendrick Goltzius (1586). All feature a blind hurdy-gurdy player. The best-known example is however Pieter Bruegel the Elder’s The Blind Leading the Blind in the Museo di Capodimonte in Naples. A fourteenth-century chronicler already refers to the hurdy-gurdy as a blind beggar’s instrument that was used to appeal for donations. Numerous references to blind hurdy-gurdy players can be found in sources from the fifteenth to the seventeenth centuries, and these blind itinerant performers not only appear in musical treatises and dictionary entries, but also as characters in plays and poetry. Hurdy-gurdy players were actually often sightless and they used their instruments as much to attract attention as for treating their audience to musical entertainment. They enlivened merry gatherings with the primitive and penetrating sound of their instrument. In Dutch art of the seventeenth century Rembrandt’s famous etching of 1648 of a company begging at the door, which includes a blind and old hurdy-gurdy player, constitutes an artistic highpoint of this iconography. Adriaen van Ostade made an etching with the same subject in 1647.
This statue however was not after a Dutch but after a French engraving from the same period: Jacques Bellange (ca 1575-1616). Bellange who worked and lived in Nancy made for the most part religious prints. Only two genre-scenes survive, both depicting hurdy gurdy players.
Both prints were used for ivory statues. One statue is now in the Grünen Gewolbe Dresden. It was first mentioned in the inventory of the Kunstkammer in 1741. The statue came from the Brühlsche Sammlung.
This statue is probably by another hand, but also after Bellanges print. This print was very popular and was copied very soon after its first editions by the German engraver Matthaus Merian the Elder.
The dog, probably referring to the blindness of the hurdy gurdy player was not in this print by Bellange but only in the other. A 17th century print by Jan Matham of a Hurdy gurdy player shows him with a dog on a leash. The sculptor must have been familiar with these other prints. 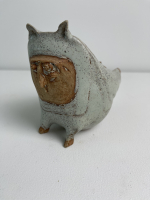