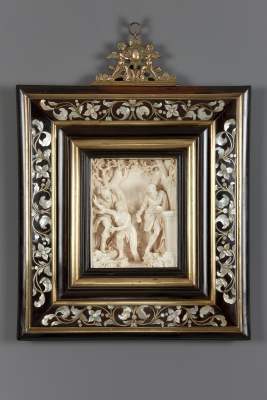 This spectacular ivory relief of Susanna and the Elders is a new addition to a rare group of ivories by the Venetian ivory carver Antonio Leoni (active 1704-1716, Düsseldorf), one of the court sculptors of Elector Palatine Johann Wilhelm II (1658–1717) in Düsseldorf.
Due to its strong framing and challenging variations in depth of field and carving, the present ivory is more diorama than relief. Although laudable artists such as Francis van Bossuit and fellow Düsseldorf court sculptor Ignaz Elhafen also recessed their reliefs in this manner, it was Antonio Leoni who took this technique to its epitome. A relief with the Martyrdom of Saint Lawrence from the collection of the Elector Palatine in the Bayerisches Nationalmuseum (Berliner, op.cit., no. 464) is conceived in an identical manner with a separately made ceiling. The better known pair of large horizontally oriented reliefs of the Rape of Proserpine and the Sacrifice of Iphegenia in the same museum, are constructed similarly and are also full of extremely closely related details (see Schmidt, op.cit.). Striking is the execution of the background, with flattened seemingly liquid clouds carved in low relief confronted with the impressive three-dimensionality of the soft writhing trees with sparse leaves and splits in the bark revealing stippled wood below (best illustrated by Baumstark, op.cit., p. 295). The rounded suppleness of the back of the scene is translated to the nude Susanna whose soft anatomy is just like Proserpine and her attendants despite the twisting poses and desperate facial expressions. Note also the arrangement of their outstretched fingers, with the middle- and ring fingers closer to each other. The faces of the bearded men in the latter relief, Pluto and two river gods, are similarly represented in profile with narrow beards arranged in tresses. However, a large standing Saint Rochus long associated with Leoni (Berliner, op.cit., no. 465) and the figure on the far left of the aforementioned Saint Lawrence relief compare even more closely, especially in terms of elongation and clothing. The surface of the foreground, lastly, consists of irregular waxy rocks interspersed with some shoots of foliage. This is a characteristic of all of Leoni’s reliefs but is best observed in the grand Conversion of Saint Paul from the Elector Palatine’s collection and also in Munich, which is fully signed: Antonius Leoni Venetus F. (Berliner, op.cit., no. 466).

Through the marriage of his sister with Emperor Leopold I and his own wedding to Anna Maria Luisa de’ Medici, Elector Palatine Johann Wilhelm II had access to both the latest courtly fashions in Europe and the most talented artists. Painters such as Eglon van der Neer, Adriaen van der Werff, and Jan Weenix contributed to his vast picture gallery at the court while he commissioned an enormous amount of works from Rubens in Antwerp. Sculpture was imported from the workshop of Massimiliano Soldani-Benzi in Florence while Gabriel Grupello, Ignaz Elhafen, and Antonio Leoni lived at the court in Düsseldorf to furnish it with ivories. Under the Elector’s generous patronage the three artists flourished and produced extraordinarily large but intricate ivories in an almost painterly Baroque style. Antonio Leoni joined the court in 1704 and a large unfinished tankard from the Elector’s collection in Munich suggests he abandoned his post upon Johann Wilhelm II’s death in 1716 (Berliner, op.cit., no. 477). The signature on the Conversion of Saint Paul identifies him as a Venetian but despite his precocious talents it is unclear how Leoni found his way to Düsseldorf or where he was employed after 1716. 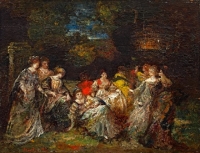 Elegant ladies in the park 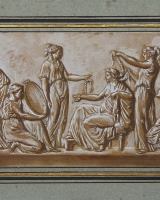