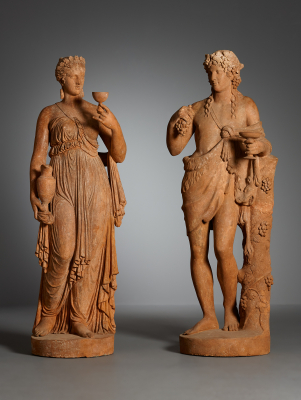 A pair of terracotta sculptures of Bacchus and Ariadne with wine attributes. Ariadne wears a Roman robe, in her hands a drinking cup and a wine jug. The wine god is represented according to the classical principles. As early as antiquity, he was portrayed as a partially nude young man, clad in a panther skin and a crown of vine leaves. During the Renaissance, such depictions imitated examples from ancient times. This young god symbolized the grape harvest, joy and intoxication, theatre and music.

There is greater variety to be found in the representations of Bacchus, however. For instance, the god symbolizes the autumn (when wine is harvested), in works depicting the four seasons. Bacchus is also depicted as a child or a slender youth. At other times we see him as a stout drunkard, often drinking or riding a wild animal. He is frequently surrounded by his wife Ariadne and Maenads, the female followers of Bacchus.

The mythological story of Bacchus (or Dionysus) and Ariadne is a favourite subject in art. Grieving for her husband Theseus, who abandoned her, Ariadne wanders over the island of Dia (Naxos). She is taken in by a priest at Dionysus’ sanctuary. When Dionysus visits the island, he meets the grieving Ariadne, falls in love with her and makes her his goddess wife. Ariadne is known as the goddess of Passion.

This terracotta sculpture of Ariadne bears great resemblance to two plaster sculptures in the Metropolitan Museum of Art. Exhibited in niches in the ‘Bordeaux Room’, they are attributed to an Italian sculptor and merchant named Polly who, according to the New York museum, was active in Paris around 1800.

Literature:
Period Rooms in the Metropolitan Museum of Art, p. 126-133

Viewing cabinet with flower basket of all kinds of shells