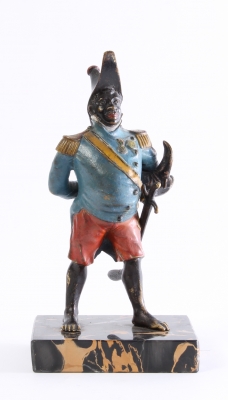 A cold painted bronze model of general Toussaint-Louverture on portor base, circa 1880

After the outbreak of the French revolution, the unrest also spread to the colonies. In Haïti, the ex-coach man François Dominique Toussaint-Louverture lead slave rebellion. He was a cunning and exceptional leader who succeeded in driving the plantation owners away. After the abolition of slavery in 1794 he became a general for the French Republic. He was successful fighting against an English invasion force that landed in Haïti and declared independance for the country in 1800. An expedition force of consul Napoleon Bonaparte forced him to surrender. He was captured and brought to France where he died in captivity.
Lit.; Walter Crab, 'De Franse Revolutie, Het begin van de moderne democratie.', pp. 82.