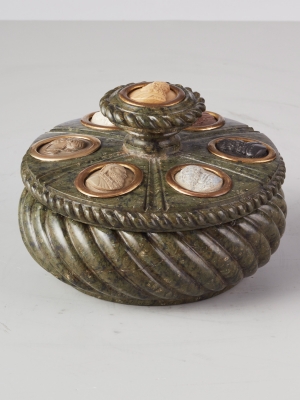 The grey green 'Serpentina Moschinata' segmented cover inset with seven brassbound oval lava relief cameos with portraits of Renaissance scholars, centred by a knob-handle set with a further portrait medallion. The circular gadrooned base inset with gilt brass and glass liners for ink and sand with two apertures for goose writing feathers.

The Grand Tour refers to the 17th -19th century custom of affluent northern European (and later American) ladies and gentlemen to take a trip through France to Italy to learn about classical culture. Visits to Naples and the excavations of Vesuvious were popular. Visitors were encouraged to return home with souvenirs such as this inkwell.

'Serpentina Moschinata' was named by Roman marble workers who gave this stone the name Serpentina (snake like) because of its resemblance to snake skin, and Moschinata (from moscha meaning fly) due to the presence of small black specs looking like little insects. Also called 'Serpentina Moschinata Verdi' as a result of its distinctive green colour.

One expert suggests that the oval relief cameos found on such pieces are not made from lava (from Vesuvious), but from local limestone. 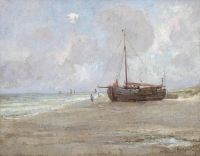 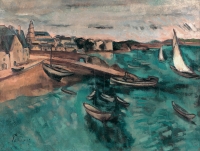 Sailing ships in a port

P10 Boats near the river bank 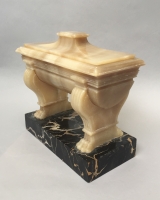