This impressive sculpture depicts Christ wearing a long, heavy shroud and the Crown of Thorns. His upper body and arms are tied with ropes. Christ is flanked by two Roman soldiers wearing Classical styled armor. The soldier who is leading Christ forward, holds a knotted rope in his left hand and a beating-bat in the hand of his twisted right arm. The soldier wears a outstandingly composed helmet, covering most of his face. The second soldier wears a feathered helmet together with an impressive suit of armor, embellished with elegant decorations, featuring a striking grotesque on his chest. His muscular body and powerful pose form a remarkable contrast with the solemn and submissive pose of Christ.

This group is a clear expression of Mannerism. This artistic movement is notable for its intellectual sophistication as well as its artificial (as opposed to naturalistic) qualities. The ingenious pose of the figures in this group (especially that of the soldiers), is clearly influenced by the ‘figura Serpentinata’: the spiral pose typical of Mannerism. Other elements are the
carefully balanced composition, the seemingly correct yet disfigure proportions and the highly refined quality of the carving. 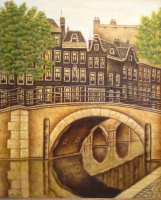 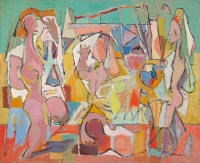 Compostion: on the beach