Eric Claus is an important figure in the field of contemporary classic sculpture. Through a large variety of subjects, Eric Claus knows how to enchant his public and retain their attention. Whether he creates the characters from the popular Italian Commedia dell’arte, the great philosophers over the centuries or any other  subject, his artistic vision and his craftsmanship keep taking the on-looker by surprise.  Apart from sculptures and paintings, Eric Claus has been building an impressive oeuvre of coins. 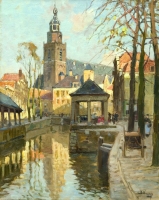 Marius Bauer: study drawing made at the The Hague art academ...