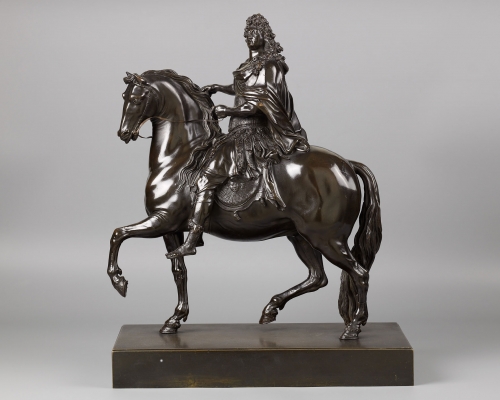 The image of the mounted sovereign dates back from antiquity, with Marcus Aurelius as prime example. It was seen as the most dignified and superior representation of power. Once Louis XIV had reached the pinnacle of his glory in 1685, a program was set up to spread the image of this power to every nook and cranny of the French realm. A great number of monuments were erected as proof of honour and loyalty to Louis le Grand. For this purpose ten squares, the so called ‘Places Royal’, were created to accommodate the huge equestrian statues. In 1688 such a statue was commissioned to Martin van den Bogaert for the Place Bellecour in Lyon. Just like the immense equestrian statues from the hand of François Girardon and others, in Paris, Aix en Provence and other cities, this statue did not survive the French revolution.

Martin van den Bogaert was born in Breda in 1637 and was trained as a painter in Antwerp. Soon he moved to Paris where he Gallicised his name and became a sculptor. He died in Paris in 1694, but his fame stretched way passed his demise, because of the demand for the smaller version of statue throughout Europe. The model was also modified (another head) to be issued as le Grand Dauphin and Maximilian II of Bavaria.

The importance of the equestrian statue of Louis XIV was thought to be so enormous, that Diderot used it in his Encyclopédie to clarify the art of bronze casting. This statue after Desjardin is part of the most important collections in the world, like the collection of the Queen of England, the Wallace collection in London, the Metropolitan Museum in New York and the Louvre. 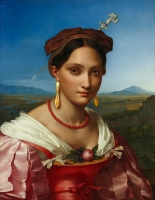 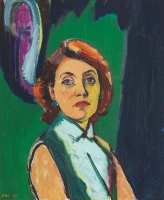 Portrait of the wife of J. Rädecker