The Flagellation of Christ

In the centre of the composition Christ is depicted tied to a Doric column. Notable is the great attention for anatomy and physical proportions and Christ's elegant Classical ‘contrapost’ pose. Christ is flanked by two soldiers holding flogs. The figure at the right wears a Renaissance ‘Landsknechts’ attire, with a cap, a cuirass with attached faulds, a codpiece and striking paned slops. In his raised hand he holds a scourge, a whip lies at his feet. Between Christ and the soldier, another figure stands out from the background. The figure on the left wears a loose fitting tunic, held up with a belt featuring a remarkable ‘bullock dagger’. At his feet lies a child-like figure, wearing a round cap over his deformed sardonic face. Notable are the wicked, or even grotesque faces of the tormentors, which form a great contrast to the serene Christ. The upper level of the group is formed by three Apostles. In the middle stands St. John, the youngest Apostle, who is traditionally depicted beardless. To his right, a bearded St. Paul is depicted, ready to draw his sword (not only in rebellion but also referring to his iconographical attribute). The figure on the left arguably represents St. Peter, who wears a Renaissance cylinder-shaped acorn hat. Noteworthy are the high quality and refined physiognomy of these three figures.

A French walnut carved bust of Bacchante, circa 1830 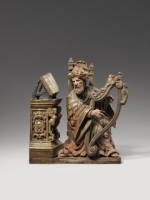