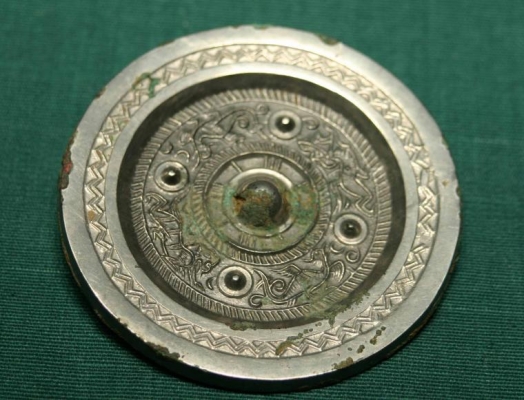 Green patina on the reverse side.
Five bronze bubbles on the front.

The earliest bronze mirror found in China dates back to the Xia Dynasty, over four thousand years ago. Mirrors were meant both as practical items, of assistance when putting on dress and make-up, and as works of art. During the Warring States Period the range of styles and techniques availablef or the production of mirrors greatly increased. The Han Dynasty subsequently experienced the formation of more elaborate, lively styles, which were continued in the Tang Dynasty. Natural themes such as leaves, grapes, auspicious beasts and gods were preferred over earlier geometric motifs. Later mirrors were objects of mass-production and therefore show a decline in quality. During the Qing Dynasty, bronze mirrors were replaced by those made of glass.

A pair of Charles X French candelabra, around 1825