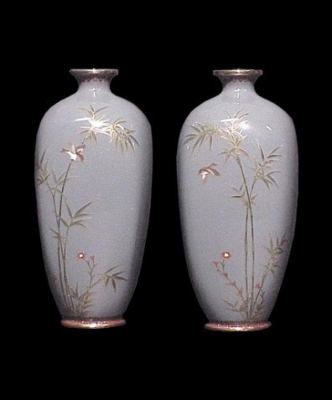 A pair of cloisonne vases

A pair of cloisonne vases with a bird in bamboo decoration in soft colours; silver rim and foot.

Cloisonné enameling has been known in the West for nearly two millennia, and in China since the fourteenth century. In Japan, however, it made little headway until the last few decades before the onset of the Meiji area. The Japanese are thought to have used enamels since 1600, yet mainly in the less complicated technique of 'champlevé'.
Towards the middle of the nineteenth century, cloisonné enamel vases, bowls and plates were suddenly starting to be manufactured. By the 1880s, Japanese enamels were considered one of the wonders of the world, popular both in Japan and in the West. The rapid growth in popularity of enamels went hand in hand with a rapid decline. Therefore, the number of well-known and appreciated masters is relatively small. Hayashi Kodenji is definitely ranked among the most important enamel-artists of the Meiji era. 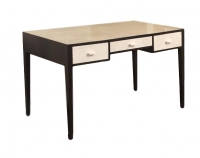