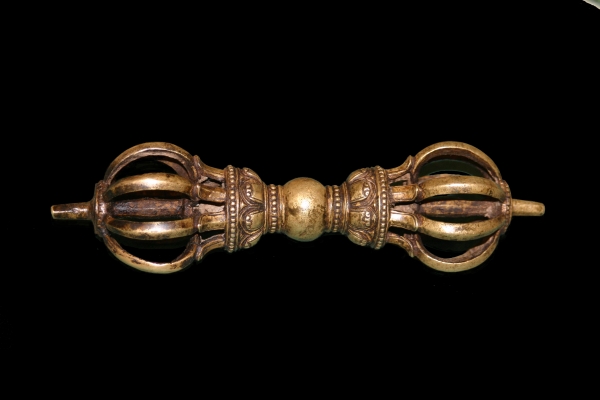 The Vajra (Tibetan: dorjeis) a Sanskrit word meaning both thunderbolt and diamond. This vajra or dorje is made out of bronze. The middle axis ends on both sides with bowls. The middle part represents two stylized lotus flowers.

The Tibetans culture is foremost defined by religion. The country was for the first time united in the 8th century B.C. when also Buddhism was introduced. Although Buddhism was pursuited at first it has developed into the most important belief in Tibet en has influenced strongly the political, intellectual and cultural live. Still now in days the Tibetans art is primarily religious art. Works of art are seen as a frame through which we can see the royalty of wisdom. Most of the works of art were made as figures of the divine world or as objects for abbeys or temples. The Vajra is one of the most important symbols of the Vajrayana Buddhism. It represents enlightenment. It is a ritual tool or spiritual implement which is especially used in a symbolic way to banish the evil spirits. The Vajras are used in particularly by Lamas (Buddhist priests) and gods.

A pair of French Directoire candlesticks, around 1890

Wooden statue for on the rudder at the stern of a wooden shi...