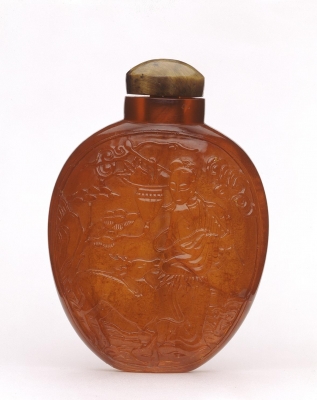 Chinese snuff bottle with a portrayal of Xi Wang Mu.

The Queen Mother of the West (Chinese: 西王母; pinyin: Xī Wáng Mŭ; Wade–Giles: Hsi Wang Mu; Japanese Seiobo, hangul:서왕모 ), is an ancient Chinese goddess, also known in Japan and Korea. Her origins can be traced back to oracle bone inscriptions of the 15th century BCE that record sacrifices to a "western mother". (Cahill, 1993) Even though these inscriptions illustrate that she predates organized Taoism, she is most often associated with Taoism. From her name alone some of her most important characteristics are revealed: she is royal, female and is associated with the west. (Benard, 2000) The growing popularity of the Queen Mother of the West, as well as the beliefs that she was the dispenser of prosperity, longevity, and eternal bliss took place during the 2nd century BCE when the northern and western parts of China were able to be better known because of the opening of the Silk Routes. (Mair, 2006)

Her official Taoist title is Yaochi Jinmu (瑤池金母), or the Golden Mother of the Shining Lake. Historical (T'ang dynasty) biographers name her: Chin mu yüan chün, The Primordial Ruler, Metal (Gold) Mother; Metal (Gold) Mother of Tortoise Mountain, She of the Nine Numina and the Grand Marvel; and the Perfected Marvel of the Western Florescence and the Ultimate Worthy of the Grotto Yin. Commoners and poets of the T'ang dynasty referred to her more simply as Queen Mother; Divine Mother; or by the ancient, familiar expression for "mother" or "nanny", Amah. 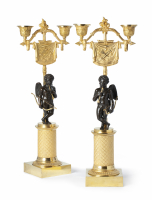 A Pair of Empire Candlesticks

Two Wings of a Triptych with Church Feasts