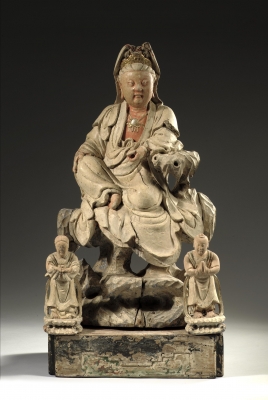 A wooden sculpture with original colors and gilding.

It is generally accepted (in the Chinese community) that Guanyin originated as the Sanskrit Avalokiteśvara (अवलोकितेश्वर), which is her male form. Commonly known in English as the Goddess of Mercy[1], Guanyin is also revered by Chinese Daoists (Taoists) as an Immortal. However, in Daoist mythology, Guanyin has other origination stories which are not directly related to Avalokiteśvara.

Guanyin's origin is debated among scholars. The root of this debate lies in the history of religion in China. China's indigenous religion is Daoism. It is possible that Guanshi'yin originated as a Daoist deity, the Queen Mother of the West. With the introduction of Mahayana Buddhism to China in around the 4th to 5th centuries, Daoism and Buddhism became religious rivals in China. The Buddhist tactic was to change, and even supplant, indigenous Daoist deities in favor of Buddhist deities. Over the centuries, this trend has had the effect that it is now virtually impossible to determine Guanshi'yin's true origin. The official Buddhist view is that Guanyin originated with the male Avalokiteśvara, though Guanyin's origin may be more complex than this simple, linear derivation. While it is certain that the name "Guanshi'yin" is derived from the name "Avalokiteśvara", the image of the Chinese/Korean/Japanese/Vietnamese Bodhisattva (along with her femininity) may be at least partly derived from other sources. 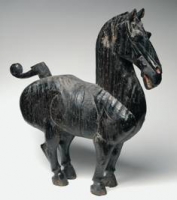 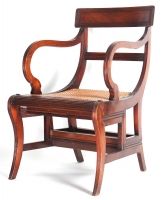