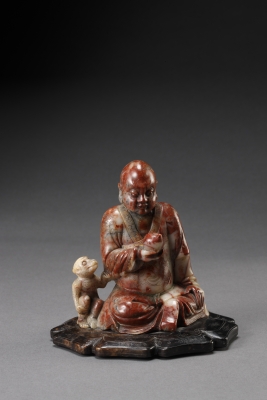 Soapstone Sculpture of a Luohan

The Soapstone of very fine Furong quality. Very finely incised design.
The exact interpretation and etymology of words such as arahant and arhat remains disputed. In the Theravada tradition, and in early PTS publications, the word arahant or arhat is interpreted to mean the "worthy one"[1] This has been challenged by more recent research, resulting from the etymological comparison of Pali and early Jain Prakrit forms (arihanta and arahanta).[2] The alternative etymology is "foe-destroyer" or "vanquisher of enemies," which corresponds to the Jain definition.[3] The latter challenges the assumption that the root of the word is Pali araha (cf. Sk. arha); Richard Gombrich has proposed an etymology of ari + hanta, bringing the root meaning closer to Jina (an epithet commonly used of both the leaders of the Jain religion and Buddha).[4]
The term arhat was translated into East Asian languages phonetically as a transliterated term, exemplified in the Chinese āluóhàn (Ch. 阿羅漢), often shortened to simply luóhàn (Ch. 羅漢). However, the Tibetan term for arhat was translated by meaning from Sanskrit. This translation, dgra bcom pa, means "one who has destroyed the foes of afflictions."[5] This Tibetan translation of the meaning conforms with the Jain definition as well. 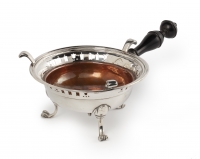 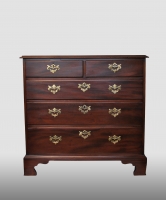