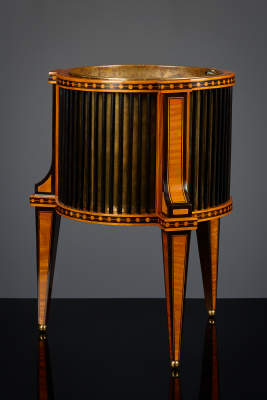 A Dutch Louis XVI tea-brazier / tea stove with vertical ebony bars on three tapered legs. The ensemble is lavishly decorated in a playful combination of satin and ebony. The frame supporting the bars are elegantly embellished by horizontal bands with an inlaid beading motif resembling a string of pearls.

The tea stove is a typical Dutch piece of furniture that made its appearance around 1750. When tea was introduced into the Netherlands, it was a very exclusive product and only consumed by the wealthier classes. However, towards the end of the 18th century, tea had commonly become accessible. And, as the exclusiveness of tea itself disappeared, people began to look for more sophisticated teas and elaborate ceremonies around it. The tea stove was used to keep the kettle warm with burning coals and was usually placed near the drawing room.

Outside the Netherlands, this typical piece of furniture is often mistaken for a jardinière. 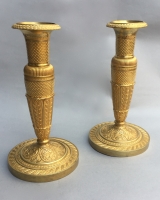 A Dutch walnut mangle board