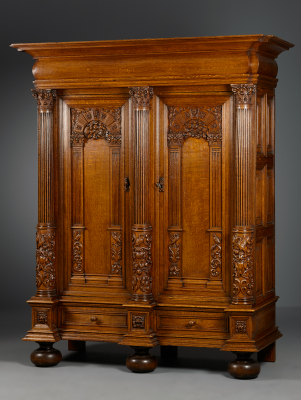 A magnificent Frisian two-door cupboard, with lavish carvings, dated 1663. Three ball feet support the cabinet at front, three basic rectangular legs at the rear. The base with two drawers flanked and divided by three lion's masks, which in their turn act as pedestals for three Corinthean reeded columns flanking and dividing two doors. The pillars are adorned at their base with rich carvings of birds, flowers, tendrils and a cartouche with quatrefoils. The centre column features a carved cartouche with the cabinet’s date: 1663. The pair of doors with arched panels are headed by lavishly carved decorations: the left door with unripe fruit while the right one features ripe fruit. Here, the columns are embellished with lavishly carved foliage and adorned with a cockerel,  a crane, a swan and a peacock, respectively. The cupboard is topped by a moulded rectangular cornice with recessed corners. An interior with three shelves and two doors with open-work geometric carving in the top.
The cabinet may have served as a wedding gift. This can be deduced from the abundant symbolism referring to fertility and marriage. For example, the two outer columns depict a pelican feeding its young with its own blood as a symbol of selflessness. The centre column dividing the panelled doors depicts a swan, which was viewed as a symbol of beauty and love due to its association with the goddess Venus. Furthermore, the unripe and ripe fruit of the arched panels point to the ripening and fertility of a young woman.

The cupboard can be characterised as an early predecessor of the Frisian ‘keeftkast’, which was mostly produced during the fourth quarter of the seventeenth century. Although there are quite a few similarities, there are also several distinct differences. The main difference is the exceptionally high quality of the carvings, which are very detailed and deep . This cupboard is also much larger than the average cabinet of the time. Furthermore, one does not find keeft cupboards with this extraordinary type of oversailing moulded cornice with recessed corners.