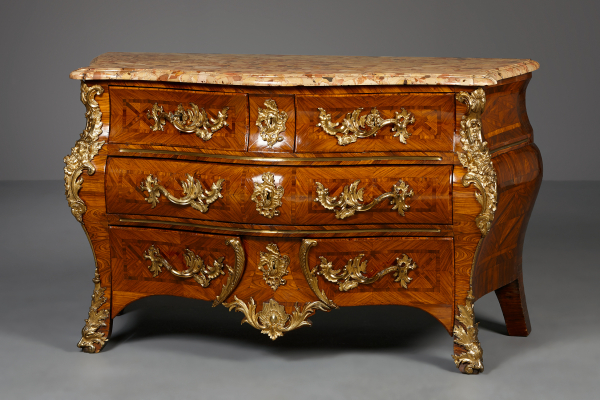 A large ormolu-mounted commode en tombeau with a Brêche d'Alep marble top that repeats the curves of the front and sides. Two short drawers, flanking a coffre fort drawer, above two long drawers on splayed feet. Violet wood veneer throughout, including panels of parquetry. The commode is lavishly decorated with superbly chiseled and gilded bronze fittings and mounts. The acanthus leaf sabots give the impression of stylised bird’s heads while the exquisite flower-spouting mascaron chutes are very rare in their design. The arched cut-out in the bottom drawer simulates a bridge (hence the French name ‘à pont’) and is flanked by two mirrored C-scrolled ormolu foliate mounts. A stylistic element that is typical for the Louis XIV period is the brass strip between the upper and middle row of drawers.
The commode’s pronounced curved shape is extraordinary, giving the piece a beautiful undulant outline.
The commode is stamped MM below the top. The monogram refers to the recently rediscovered Parisian cabinetmaker Michel Mallerot (1675-1753) who became maître ébéniste in 1740. His relative obscurity is due to the fact that a greater part of his career flourished before 1743. From that year, furniture made by members of the guild was stamped with a guild mark and a maker's mark. It is a pity that Mallerot is still little known to the public; his work displays a tremendously high level of skill and superb craftsmanship as can be seen in the piece featured here.
All bronzes are marked C Couronné. An edict dating 1745 required craftsmen to employ a mark on any alloy containing copper in the form of a distinctive lower case letter C surmounted by a crown. The “C Couronné” poinçon, also known as “C coronata” had to be applied to objects as well as furniture embellished or mounted with bronze elements.
The crowned C-mark, measuring just a few millimetres, had long been a much-debated issue for researchers- was it the signature of the bronzier Caffieri, that of the fondeur Colson, or the stamp of the furnituremaker Cressent?
It was not until 1924 that Henri Nocq, in his thesis Le Poinçon de Paris, identified it as a tax mark for bronze objects and fragments that was sanctioned between 1745 and 1749. As with any new tax, this one was very unpopular, triggering many artisans to formally contest the decision in lawsuits against the state. Nonetheless, the edict was formalised in February 1745 and became applicable to “all existent and new works of bronze, pure copper, cast iron, mixed copper, wrought-, ground-, hammered- planed-, engraved- gilded, silver or coloured- no exception.”
Every craftsman was required to report to the hall-mark office at the "cul-de-sac des Bourdonnais" in the Halles district, have his work stamped and pay the royalty fee. It was no coincidence that this all took place during the War of the Austrian Succession and that the military needs were urgent at the time. When the Treaty of Aix-la-Chapelle was signed in February 1749 and financing the king’s campaigns was no longer necessary, the "abolition of small new taxes" followed shortly.
Since the poinçon was obligatory for all metalwork containing copper, sold or exported, between March 1745 and February 1749, one can easily stumble upon the tax mark on pieces dating prior to 1745. For instance, if they received a new layer of gilding or if the objects were brought onto the market during these years. This is also the case with several pieces of furniture by André-Charles Boulle from the Louis XIV period.
Provenance:
Sale Carola van Ham, Cologne, 1997/1998
Private Collection, Belgium
Literature:
Comte François de Salverte, Les ébénistes du XVIIe siècle ; leurs œuvres et leurs marques, Paris et Bruxelles, 1923