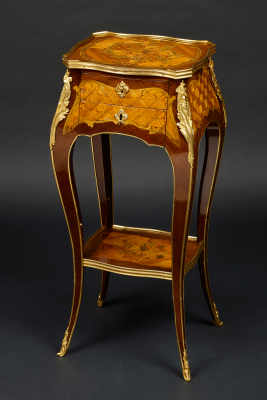 A small and elegant Transitional table with two drawers and ormolu mounts. Decorated overall with a playful line pattern of parquetry, within a floral cartouche surround. The two drawers under the shaped top with floral marquetry can be closed separately. The four slender, cabriole legs are joined by a tier that is loosely conform the shape and marquetry of the top. The furniture piece is lavishly decorated with ormolu fittings and gilt-bronze banding that accentuate its shape and form, including banding along the legs mounted with a scrolled cartouche at the top and a foliate scroll at the foot.

This fine piece of furniture is the epitome of prosperity and decadence. Only the absolute upper class of the Ancien Régime could afford such a small piece of furniture, with no apparent function of relevance. Such small tables from this period are therefore exceptionally rare.

The table is stamped “L. Boudin JME”.
Leonard Boudin (c. 1735-1807) began his career as an independent travelling cabinetmaker. He was admitted to the Parisian guild as ‘maître ébéniste’ in 1761. He set up his studio in the Faubourg Saint-Antoine in Paris. Long before he obtained his Master title, he already collaborated with Pierre Migeon III. In 1772, Boudin opened a shop where he sold luxury goods as ‘Marchand Mercier’ in addition to his work as a cabinetmaker.

This table is from before the time when Boudin sparked a furore as Marchand Mercier. It can be matched within a group of four pieces that are all stamped Boudin and all of them feature floral trelliswork. They all have the exceptional model with a shaped rectangular top, and four slender, tapering cabriole legs joined by a platform. The dimensions of the four tables are also virtually identical. All of these tables are to be dated to the first decade he became maître ébéniste, between 1761 and 1770.

One of these tables is part of the Huntington Collection (formerly the Paul Dutasta Collection). A second, from the collection of Baron de Redé, was sold at auction in Paris by Sotheby's on 16 March 2005 under lot 120.
A third work and writing table has been part of the Robert Lehman Collection in the Metropolitan Museum of Art since 1975. However, the marquetry of this example is slightly different (inv. 1975.1.2023). From 1924 to 1947, it was in the possession of Henri de Rothschild, who lived in the newly constructed Chateau de la Muette in the 16th Arrondissement in Paris. The table later became part of the Lehman collection via the art dealer brothers Duveen.