A small French commode with drawers veneered with satinée. The furniture has three drawers with traverses inlaid with brass fluting. The slightly curved front is trimmed at the corners with gilded bronze "chutes" in the form of mascaron ornaments. The drawer fronts are trimmed with gilt bronze and each is fitted with two knobs in the shape of rosettes and a key plate with a mascaron in the centre. The top of the commode is covered by a slate of marble.

Although this piece of furniture bears the mark of Pierre Migeon II (1696-1758), it was almost certainly crafted by Etienne Doirat.

Etienne Doirat (c. 1675-1732)
Doirat was probably born around 1675-1680. After his marriage in 1704, he lived at la Grande rue du Faubourg Saint-Antoine. In 1726, he moved to the entrance of the Faubourg Saint-Antoine near the Bastille.
At the time of his death in 1732, his workshop had eleven employees. The inventory mentions no less than 200 furniture pieces, finished and unfinished, including commodes and chests with drawers, bureau plat desks and bookcases, but also sécretaires de pentes, entirely to the fashion of the time. The style and quality of Doirat's furniture pieces match that of André-Charles Boulle in structure and finish as well as in the application of bronze ornaments. This style precedes the comparable furniture made by Charles Cressent (1685-1768).
According to the inventory drawn up after his death, Doirat’s stock included many lead models, rough castings and unfinished work that were to serve as bronze decorations for his furniture. This provides evidence that Doirat kept his bronze models exclusively for himself.

Doirat was one of the few furniture makers who often marked his work with his name far before it was made obligatory by the Jurande des Menuisiers / Ebénistes in 1743. This mandate was ratified by the king in 1751.
The inspection by the "Jurande" not only served as a form of taxation, but also as a quality control with regard to the construction and the required absence of irregularities in the piece’s wood, before the mark "JME" of the furniture makers' guild was permitted to be applied.

This piece of furniture was crafted by Doirat. The reason it bears Pierre Migeon’s makers mark is probably because it was traded by Migeon. He often acted as the so-called Marchant-Mercier, mainly because of his excellent relations with the Garde-Meuble of the French Court. 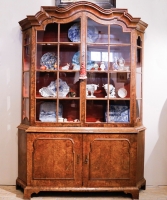 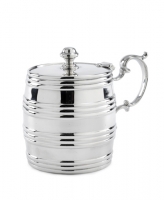 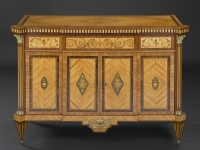