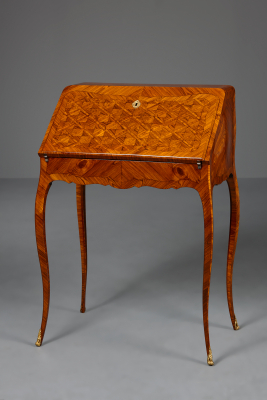 Petite piece of furniture on elegant cabriole legs. The exterior surfaces and the entire interior are veneered with amaranth. Sloping front with green leather writing surface enclosing an interior fitted with two drawers and four small compartments underneath a slightly receded shelf. Additional space for storage under the writing surface.

The bureau is stamped on the lower rail: J Dubois JME.
Jacques Dubois (c. 1693-1763) became a ‘maître ébéniste’ on 5 September 1742 and is considered one of the leading cabinetmakers of his day. The bureau en pente was one of his most popular forms of furniture and was often executed with a shaped sloping front. Bureau à pente d’époque Louis XV, J Dubois. Furniture by Jacques Dubois is kept in numerous museums, including the Louvre and the Musée des Arts Décoratifs in Paris, the Victoria and Albert Museum and the Wallace Collection in London, as well as the Metropolitan Museum in New York.

LION, wooden statue for on the rudder at the stern of a woo...