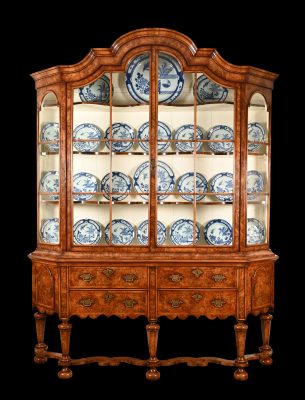 The porcelain cabinet is the most characteristic piece of furniture from the Dutch 18th century.
Porcelain collecting had taken off in the 17th century with the hijacking
of Portuguese cargo ships in 1602 and 1604. The porcelain cargoes, consisting of
more than a hundred thousand pieces were auctioned in Amsterdam and Middelburg.
Wealthy citizens at the time could afford to collect porcelain.
First, the porcelain was displayed in and on sideboards, in small open
wall cabinets, on ledges and consoles on either side of the chimney breast and
even in special rooms made for furnishing with porcelain. This development
continued in the 18th century with the china cabinet.
The china cabinet on high legs is the beginning of this type of furniture.
This china cabinet was made at the beginning of the 18th century, of oak
veneered with walnut burr walnut, with the old patina and with engraved
brass fittings.
The two small doors on the side of the lower cabinet, intended as a
storage space makes this cabinet special.
Dutch, circa 1735
Literature:
Dutch furniture, from Baroque to Biedermeier 1700-1830 by Annigje Hofstede,
publisher Waanders, page 41
Translated with www.DeepL.com/Translator (free version) 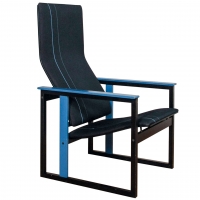 A Swiss amboyna display cabinet, circa 1880