A pair of French ormolu and crystal etageres with two dishes on a concave-sided tripartite plinth, decorated at the top with a band of palmettes. The fluted central column is decorated with palmettes and ends in a ring at the top that serves as a handle. The column is interrupted by two faceted crystal dishes. The tree scrolled volute arms on the plinth are joined by a laurel wreath that seem to support the lower bowl.

Both etageres are marked on the foot: Thomire à Paris.

Pierre-Philippe Thomire (1751-1843) was one of the most prominent bronze casters and ciseleurs of the Empire era. Despite his training as a sculptor, he chose to follow in his father's footsteps and become a bronze caster. In this profession, he was the most successful producer of bronzes of the late 18th and early 19th centuries. Thomire trained with Pierre Gouthière before starting his own business producing gilt bronze furniture ornaments. He later became assistant to Jean-Claude-Thomas Duplessis, who was director of the Manufacture de Sèvres. After Duplessis’ death in 1783, Thomire resumed his profession as a bronze caster to design and produce, among other things, gilt bronze mounts for porcelain. He was appointed "Ciseleur de l'Empereur" in 1809. 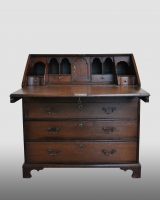 English bureau with step-interior, about 1775. 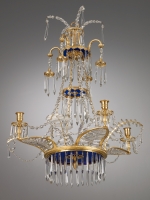