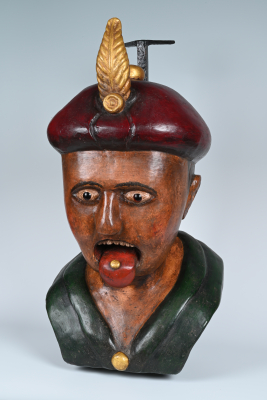 In the old days, the gaper was the most eye-catching signboard among the many signs in the streetscape.
Where you see the gaper, there was the pharmacy or drugstore.
In addition to all kinds of medicines and drinks, other stimulants such as coffee, tea, sugar and tobacco were also sold.
Often a healing effect was also attributed to these.
The outstretched tongue with pill on it speaks for itself.
If you showed the 'back of your tongue' to the doctor, he could see what your illness was and put a healing pill on your tongue .
Special details are the glass eyes and the original wrought iron mounts.
This is one of the many beautiful objects from our large collection of folk art.
This Dutch gaper dates from the 19th century and comes from a pharmacist in Den Bosch.

A Dutch flower mahogany Coulisse table with a maximum length...