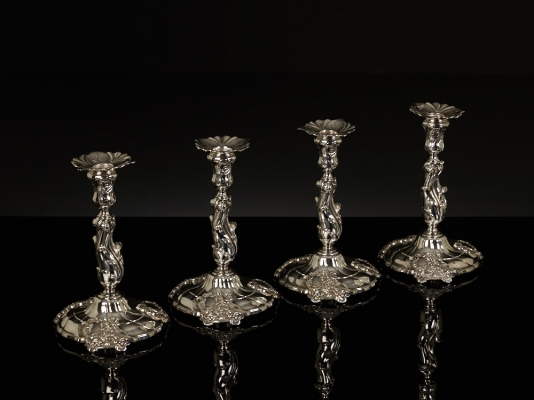 This set of four silver candlesticks is made by the silversmith Hendirk Fortman of Leiden. Fortman stemmed of a dynasty of silver miths. Not only his father was a silversmith, so were two of his brothers. Jacobus Fortman, the progenator, was appointed to the silversmith’s guild of Leiden in 1707. His eldest son Dirk became master in 1736 in the Hague. Hendrik succeeded his father and was admitted to the guild of Leiden in 1740. In 1753 also his brother Abraham was appointed master. Both the brothers remained single and reached a blessed age. Hendrik died in 1807 and Abraham in 1808. With their demise more than a century of craftsmanship by this family came to a halt.

The ‘overkeur’ mark is a tax mark used in 1795. During the Batavian Republic in the Netherlands (1795-1806), the rulers issued a legislative provision that all silverware with the exception of spoons and forks should be handed over to the Government in the provinces of Holland, Zeeland and Utrecht. The artifacts could be redeemed by their owners when they payed for the weight in silver. As proof of payment, the ‘overkeur’ mark was stamped in the objects. These candlesticks bear a stylized letter N, the year mark for Rotterdam in 1795. This means that this set has been in Rotterdam at that period.

The candlesticks rest on three feet in the form of a cast applique decorated with rocaille motifs round a plain cartouche. The stem and candleholder are built up from rocailles and volutes. The separate drip trays are of a later date. 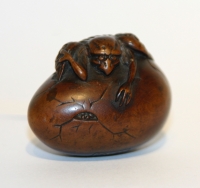 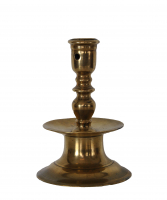 A GILT-BRONZE FIGURE OF AN ELEVEN-HEADED AVALOKITESVARA