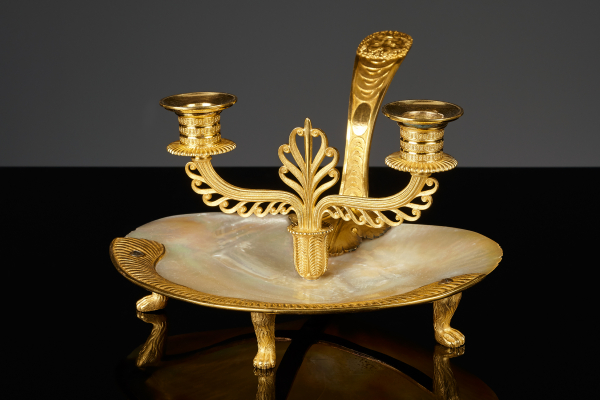 This elegant and unusual chamber candlestick is built up on four claw feet that support a large polished shell.. The mother of pearl, which also functions as a reflector for the candlelight, forms the base for a guilt bronze ornament that carries the stylised two-armed candlestick. The front of the shell is decorated with an elegant wave-shaped gilt bronze frame that also functions as a bumper. The handle, placed on the hinge of the shell, is shaped as a stylised leaf and leads to a mascaron at the end of the handle.

The chamber candlestick, otherwise known as a chamberstick, bedroom candlestick or hand candlestick was intended to light the way indoors. It consists of a small flat tray or shallow, saucer like base with a central support for the candle, Some early examples have a flat or curved handle but on later ones there is a ring shaped handle, extending upwards from the rim in a loop. The handle sometimes supports, in a pierced slot, a candle snuffer, a small hollow cone which was placed over the lighted taper to extinguish the flame without causing the snuff to smoke. 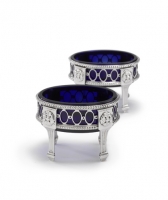 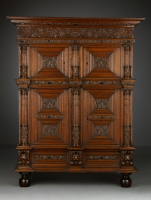