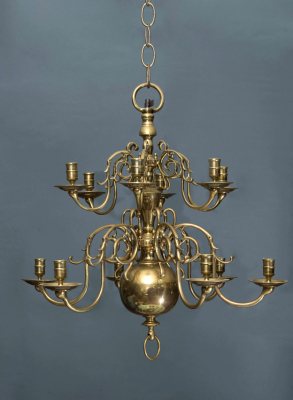 A cast brass crown with a total of twelve arms, divided over two layers.

A cast brass crown with a total of twelve arms, divided over two layers. The metal bar around which the various brass parts are grouped, is pointed at the top and thus keeps all parts of the crown together. The ring at the top hangs from an S-shaped hook. The crown is made up of a number of profiled elements between three different, large decorative shapes: At the top an inverted mushroom, in the middle a vase-shaped baluster and at the bottom a sphere that ends in a drop with a ring through it. Between these large shapes are the profiled elements as well as the rings to which the S-volute arms are attached. The rings are decorated with raised drops. In each layer of six arms, these are decorated at the roots with both upward and downward curling C-Volutes. The arms end in wide saucer-shaped fat catchers that carry the candle holders. The latter are decorated with some borders. Overall very sleek. 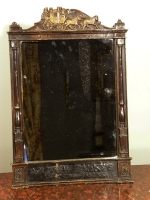