A two-tiered brass chandelier with 16 scrolled branches arranged around a central stem. The wrought iron stem that holds the different brass parts together is spied with a brass keg just under the suspension ring.

The suspension ring is surrounded by three oval scutcheons with volute shaped sides and a small crest at the top.

The chandelier is composed of various profiled elements and three large decorative shapes; a mushroom shape at the top, a vase-shaped baluster in the center and a sphere at the bottom that ends with in a drop shape. Two rings, that are positioned between the large elements each support eight branches that are held in place with brass pegs with a reversed drop shape at the top.

In 17th century Flanders and Holland a new type of cast brass chandelier appeared; a richly decorated stem with a sphere at the bottom ending in a drop shape. The branches were mounted evenly around the stem in one or more tiers.
Although these type of chandeliers appear frequently on 17th century Dutch paintings –  which leaves the impression that they were present in virtually every home –  research of household inventories of the day have taught us that they were rarely used in residential houses. Next to many churches that were lit by these  type of chandeliers, it were probably the wealthier households that also possessed such desirable objects, that most certainly would have been a striking element of the interior.

A pair of four-light Dutch wall fixtures, around 1880 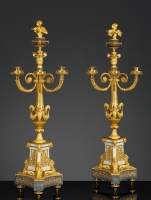