A French six-lights chandelier in ormolu and cut cristal attributed to the Parisian firm Pessoneaux & Colomb. From an upper crown, decorated at the top with alternately stylized palmettes and acanthus and at the bottom with a conic bowl finished with a stylized pine cone, three chains run down to alternate arms of the central crown of the chandelier. The chains are composed of different types of finely designed ormolu shackles. Consecutively these are a rectangular shape with a semi-circular expansion on either side decorated with flower motifs and an oval aperture in which a faceted cut crystal element is mounted alternated with an element composed of back-to-back mounted flower buds. The final shackle is ring-shaped and runs round a branch of the chandelier.

The central crown is decorated on the outside with ribbons of stylized flower motifs and beaded edges. On the inside at the top as well as at the bottom a hemispherical bowl of cut crystal is mounted. The lower bowl is finished at the bottom by an ormolu pine cone surrounded by a cut crystal cuff in the shape of a flower. The upper bowl is topped by an ormolu ornament in the shape of a brazier.
From the central crown six trumpet shaped branches decorated with flower motifs curl up. The branches end in stylized flower buds at the bottom and at the top in cut crystal drip trays on which vase-shaped candle holders are mounted. The candle holders are decorated with swans.

Although very few information about the Parisian enterprise Pessoneaux & Colomb is available, we know that the Swedish King Carl XIV Johann (1763-1844) commissioned three very similar chandeliers for the castle Rosendal. The company was an important supplier of chandeliers, candelabra, and clocks. Later on the company also supplied furniture and fabrics to an important clientele. The enterprise was run by Etienne Pessoneaux and Jean Charles Antoine Barthélémy Colomb as a “Societé” of which the stock was very much in demand by its shareholders. Among them were mostly Parisian business men like Monsieur Maupetit of the Rue Clarry, but also the honorable gentlemen A.-J. and A. Obert who ran an affiliate company of Pessoneaux & Colomb at the Kalverstraat in Amsterdam. Colomb died on March 31. 1833 in Paris, after which event his widow tried to continue the company. Unfortunately she was forced to file for bankruptcy in 1834. 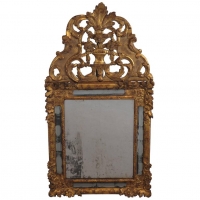