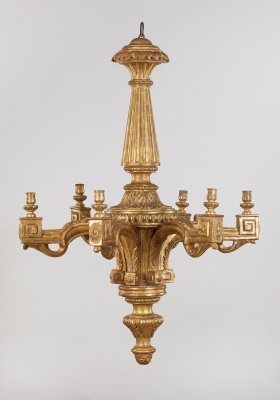 A six-armed chandelier in carved and gilt pine. The ring from which the chandelier is suspended is affixed to the stepped top of the stem, which is decorated with acanthus leaves. The stem is fluted and constricted by a pearled band. Below this, it widens towards a concave connection with pearl edging and downward-sloping acanthus leaves beneath, connecting to the central part of the chandelier, which is “introduced”, as it were, by two stepped bands with an egg-and-tongue band in-between. Below, the fluted section to which the six branches are attached.
The branches are supported by acanthus leaves and their bases rest upon meanders decorated with rosettes. The branches end in meanders with oval rosettes, carried by attractively arched acanthus leaves. The bobeches sit on top of the meanders. The central segment of the chandelier is bounded by two stepped bands and a pearled edge. Below this, a second concave connection with sloping acanthus leaves. The chandelier terminates in a half pine cone.
In the 18th century, lighting was primarily provided by lanterns in stairwells and by wall sconces (both mirrored and mirrorless), candelabra and candlesticks in rooms. In the late 17th and early 18th centuries, chandeliers based on the French style were very fashionable, and therefore desirable, throughout Europe. Although many chandeliers were made out of wood in the early 1700s, these went out of fashion midway through the 18th century and were replaced by fire-gilt bronze versions, generally decorated with crystal or cut glass.
Consequently, to find such a handsome wooden chandelier dating from the late 18th century is exceptional.
A similar wooden chandelier is depicted in Jean Louis Guillemin, Antiquaires, Paris 2000, p. 82. 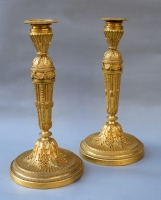 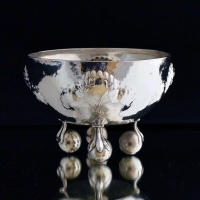 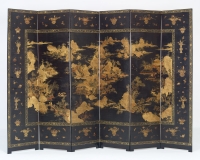 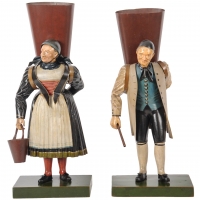