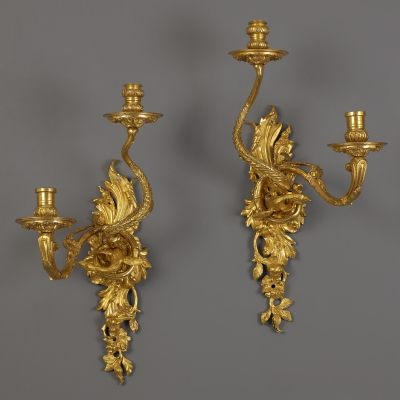 A pair of  gilt bronze two-light wall sconces with rocaille and flower motifs. The branches have a 'scaled' decoration. The candleholders are slightly different from each other, which is typical for the Régence style and in the spirit of André Charles Boulle.

The delicate way in which both the tortoise-shell and brass sheet metal are engraved undeniably increases the pleasure with which these sconces, as an extraordinary example of craftsmanship, is admired.

The French designers of ornamentation of the 17th century strived after lightness and decorative vigor. This was mainly influenced by Berain, who managed to bring the ‘grotesque’ to the center of attention again. Berain’s decorations are defined by ribbons of ornamental elements alternated with C-volutes with acanthus decorations.

André Charles Boulle (1642-1732) was a French cabinetmaker (ébéniste) who paired a fabulous technique with an exceptional imagination. One of his greatest merits was that he let go of the strong influences of Italian and Flemish furniture makers and developed a proper French style as regards to design as well as to decoration. His talent was duly noted and from 1762 on he worked for the Court of Louis XIV, the Sun King.

Soon Boulle was appointed ‘Premier Ébéniste du Roi’. This meant that he was not bound to guild rules anymore and could combine all the different disciplines he mastered without the risk of being fined. He was designer, painter, mosaic artist, chaser, marquetry worker, and ‘inventeur de chiffres’.
His international acclaim was mainly due to his elaborate marquetry in which he combined tortoise and different sheet metals that is nowadays referred to as ‘Boulle-technique’.

Off course Boulle did not work on his own. He ran a large workshop with the best craftsmen in various disciplines to assemble his exceptional furniture and objects. Next to commissions of the French Royal Court and Nobility, he soon was asked to supply the Royal Courts of Spain and Bavaria.

Boulle had four sons that all were initially apprentice and subsequently coworker in his business. After the demise of Boulle senior, two of his sons continued the workshop and the other two settled as independent furniture makers. Nevertheless, all of them continued to work in the style of their father’s workshop, using ebony, tortoise, brass, and tin.
provenance:
Lucien Kraemer, Paris 1949
Private collection Belgium 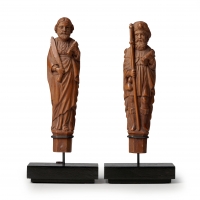 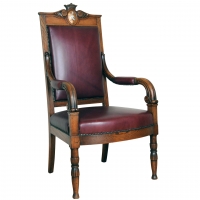 An historical important armchair from the townhall of the Du... 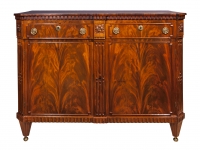