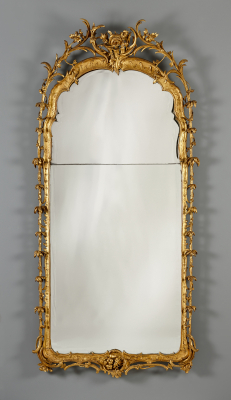 A large Dutch Louis XV mirror with a richly carved frame of gilded basswood. The slender and elegant frame is elaborately decorated with leaf motifs. The surround in the form of a foliate scroll is so ingeniously crafted that it appears to hover detached from the mirror along its base and sides. The ends join at the top of the frame, connected by an elegant spray of flowers with rocaille motifs. The divided mirror plate with subtly cut faceted edges conform the contours of the frame.

Throughout the 18th century, mirrors were placed in between windows or over the mantle; they played a fundamental role in the furnishings of the interior.
Mirrors of greater size were very costly and were therefore true centerpieces with which one could put their wealth on display. The highpoint of prosperity was being able to flaunt an interior with several sizeable mirrors in one room. 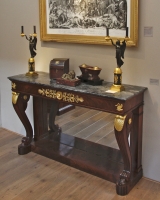 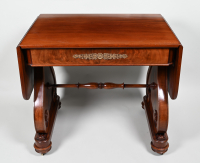 A large pair of Empire candelabras