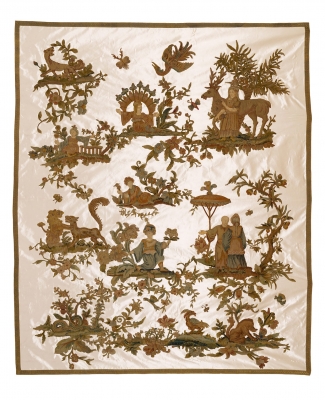 The wallcovering, embroidered in the ‘stumpwork’ technique, consists of numerous scenes that are presented as separate islands scattered across the surface of the fabric. They do not appear to be related to each other. The space between the depictions is decorated with leaves and flowering sprigs, insects and birds.
The bottom row features vegetation, flowers and various animals such as a snake, a bird and a boar. In the upper left, a scene of a wolf and a seated lion. Additionally, a kneeling man with a turban and holding a flower in his left hand. On the right, a man and a woman beneath a parasol by a tree bearing fruits. Depicted in the row above it, from left to right: a tree with a wolf and a seated man wearing a turban next a low balustrade, reaching for a plant. In the center, a seated woman with a lotus-like halo resting in her outstretched arms; a crane in flight above her. The row of scenes concludes at the right, with a man standing before a tree, a deer beside him.
On the left and right, a broad band of wool with geometric motifs frames the scenes as a whole.

Stumpwork or raised work, is a high relief style of embroidery in which the stitched figures are raised from the surface of the fabric to form a 3-dimensional effect. This technique came into use in England in the 16th Century. Usually, wool, silk and metal thread are embroidered onto a linen underground. The high relief was created by embroidering over a woolen filling. This embroidery technique’s origin is most likely to be found in Italian liturgical attire. The motifs of most of 16th and 17th-century stumpwork in England were based on the classical designs of the Italian Renaissance but were freely interpreted with great variation. It is this creative and imaginative application which gave the English stumpwork its own unique character.
Oriental motifs were introduced to the technique toward the end of the 17th Century. This was mainly under the influence of Queen Mary and her fondness of the goods that were brought in by the English East India Company (and by the VOC in the Republic).
During the early 18th Century, stumpwork went out of fashion and practically ceased to exist only to resurface again around 1750 as ‘crewel work’. Crewel work rarely features the high relief of stumpwork and was usually made with brightly colored wool.

Chinoiserie textiles – more an attempt at mimicking the oriental style rather than depicting Chinese subjects - originated in Soho tapestry weaving in England.
From the late 17th Century, Robert Robinson and John Vanderbanck designed tapestries in which the depictions of figures, animals, buildings and vegetation are placed on little islands that are scattered across the surface. The first set of tapestries produced by John Vanderbanck in this manner was made for Elihu Yale, Governor of Madras for the English East India Company during the 17th Century. This series is now in the collection of Yale University in New Haven, Connecticut. Models and motifs for tapestries were adopted for use with other textiles and techniques, including embroidery.
The individual motifs were based on Chinese lacquer, Indian miniatures and Indian chintz. And, the space between the islands was filled with variations of the “Indian tree” motif, which is also frequently found on painted porcelain. Trees, plants and flowers were depicted in exuberant abundance and were often also supplemented with animals, insects and birds, as was done in this stumpwork embroidery.

The beautiful colors of the wool are well preserved and the embroidery itself is of a very high quality. This is especially evident in the handling of the folds and shadows of the figures' costumes, as well as in the refined nuances of the colors. All embroidery is done in what the English call the “long and short stitch”, the flat stitches are alternately long and short.
Woolen embroidery on a light-colored fabric, usually linen, was often intended as a bed curtain or bedspread in the 16th and 17th Centuries. The fabric underground usually deteriorated faster than its decorative embroidery and was often replaced in the 19th Century by silk or satin, to intentionally emphasize the contrast with the embroidered wool. 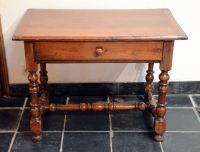 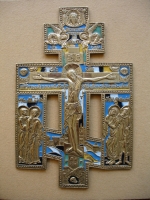 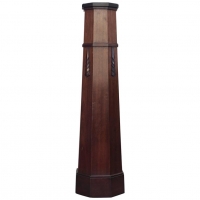