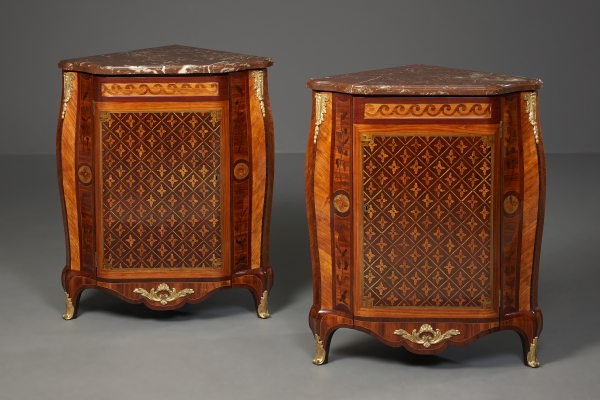 A pair of corner cabinets with Griotte Rouge Belge tops. The triangular cabinets are closed with a door that slightly recedes at the edges. The front is decorated with stylized flower motifs in a diamond pattern. The door is trimmed with a simple frame and stylized meanders in the corners. Above the door there is a decoration of stylized waves. On either side of the door cartouches show repetitions of the flowers motifs of the door. Over and under the cartouches are narrow frames with stylized sprigs

The styles over the diagonally placed feet are bulged. This form is emphasized by narrow bands of lighter or darker veneer. Directly under the table top the style is decorated with a bronze fitting of stylized leaf motifs. These forms are also used for the sabots. The lower skirting of the cabinets is decorated with a bronze ornament of two mirrored C-volutes and stylized leaf motifs.

Stamped underneath the marble top: P.DEFRICHE

Pierre Defriche became a master ébéniste on July 9. 1766. He worked on the rue Sainte Marguerite until the end of the Revolution. His work contains Louis XV, Transitional, and Louis XVI style furniture of high quality. Although there are only few objects stamped with his name known, we can assume that his production was considerably larger. He worked in commission for the marchand-mercier Turin on the rue Saint Honoré. He, on his part, supplied to other ébénistes who stamped these objects with their own names. 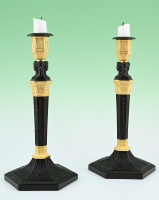 A pair of ormolu bronze and patineted Empire candle sticks