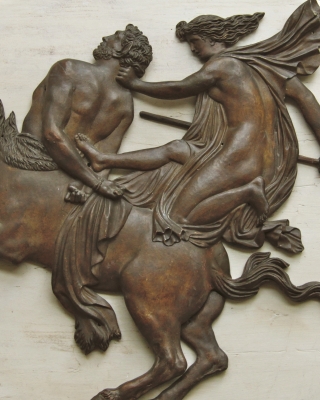 Two large wooden medallions, each with a centaur of bronzed pâte. Pâte is a mixture of chalk, silkpaper, bone-glue and water, which is very suited for making refined details.

One of the pictures is based on a fresco of a centaur, captured by a bacchante. This fresco was discovered in 1748 in Pompeï. It was already depicted in the series 'Le Antichità di Ercolano Esposte', that was published from 1757 onwards. The other centaur, with Amor on his back, seems to be inspired by the Borghese centaur, a marble statue that was in the Borghese collection and that was bought in 1807 by Napoleon. It is now in the Louvre in Paris. Statues or engravings of Centaurs were beloved objects acquired on Grand Tour in Italy.
The original wooden medallions got a new patina; the pâte has some restaurations. 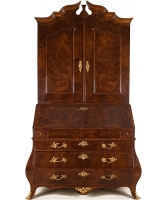