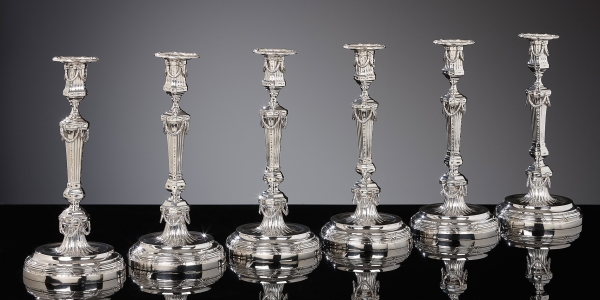 In the second half of the eighteenth century the appreciation for the classics revived. Art and architecture were permeated with the ‘true taste’. This Neoclassicism, as it was dubbed in the nineteenth century, emerged simultaneously in France, Holland, and England. The development of this style was greatly influenced by excavations in Pompeii and Herculaneum and the vast amount of publications that were subsequently issued. The art of the classics was much admired and considered the art movement most worthwhile to follow.

The style was particularly favored in architecture with the pavilion “Welgelegen” in Haarlem, nowadays the office of the provincial authorities of North Holland. But also in arts and crafts, the mostly French inspired objects were modelled in a classicist style. Newspaper adverts commended these novelties as ‘antique’ or ‘à la Grecque’. The term appeared for the first time in an advertisement of Wedgwood in September 1770.
The main influence, however, did not come from England but from France. By means of publications, prints and a vast amount of luxury goods exported throughout Europe the new style was disseminated.

These candlesticks by Frederik Manicus I (1738-1785) are a wonderful early example of the Louis XVI-style, in a period were his contemporaries were still clinging to the more flamboyant rococo.
Manicus is a remarkable master who almost exclusively worked in the neoclassicist style. Around 1796, Frederik Manicus was registered as master of the Amsterdam Guild of silversmiths and mainly produced large works. Of his hand were tureens on platters, baskets, ewers, and, in particular, candlesticks. The Aardewerk company presented two candlesticks by Manicus, also from 1770, with a similar stem but a different octagonal base, at the Delft Art Fair in 1990. The construction of the stem of Manicus’ candlesticks is obviously based on the Louis XVI style with its baluster shapes and truncated octagonal corners. The candlesticks are marked with the release token of 1795 of the city of Utrecht. This mark – a little hat symbolizing freedom on the top of a spear – indicates that these objects must have been in Utrecht or its vicinity at that period. Presumably they were still in the possession of the first owner or his direct descendants. The tax marks of the 19th century disclose the fact that these objects have been sold at least several times as a set. These sets of six candlesticks were not uncommon in the 18th century, but are rater rare in present days. As a result of divisions of property they often were divided in pairs.

A pair of French fire-gilt and patinated bronze Empire cande...

Virgin and Child beating the evil 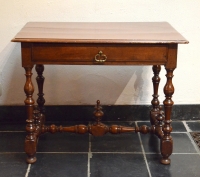