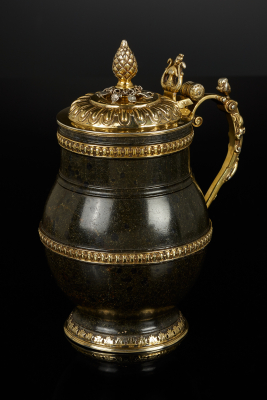 This impressive lidded tankard consists of a baluster shaped body tuned out of serpentine marble, held by two bands of gilded silver, one around the middle, the other below the rim. The base is held in silver foot decorated with an acanthusleaf edge. The scroll shaped silver handle is modelled as a female caryatid, with a realistic shaped salamander below. The thumbpiece is formed by a Siren, also known as Sirena bicodula, depicted here as a double-tailed mermaid. The richly decorated domed lid is crowned by a pineapple.

Serpentine is a semi-precious mineral which is predominately found in Saxony in Germany. The stone has a snakeskin-like pattern, hence the name. From the Middle Ages onwards, serpentine was reputed to have the magical effect of neutralising poison or it was believed that the material would break if it came into contact with poison. This supposed  quality
explains the popularity of this material for the production  of  drinking  vessels  for  royalty and
the high nobility. The small salamander placed on the lower part of the handle fits into this superstitious notion, as salamanders are poisonous. But also the Siren can be placed within this symbolism, as their songs, though irresistibly sweet, nonetheless led to death and corruption. A more physical and practical effect of serpentine was its porous structure, which provided cooling to the contained liquid by condensation.

Since the late-Medieval period, the German province of Saxony was the main area where serpentine was mined and used in applied arts, foremost in and around Zöblitz. The oldest written sources referring to the serpentine craft date to the 15th century and the earliest known dated object to 1590. It was a high-status trade and serpentine vessels were ofthen set in exquisite silver and gold mountings. August I (1526-1586), Elector of Saxony – who referred to himself himself as Serpentindrechsler (‘serpentine turner’) – held the exclusive right to mine serpentine in Zöblitz, which also allowed him to be in control of who was able to acquire this precious material. As such, it is no coincidence that the largest collection of mounted serpentine vessels in the world is kept in the Grünes Gewölbe (the ‘Green Vault’, which contains the largest treasure collection in Europe) in Dresden. Naturally, August of Saxony also presented others with these luxuriously mounted artefacts as a gift. As such, serpentine appears to have been a the exclusive concern of princes. In fact, a 1665 edict stated that the rare red serpentine was reserved exclusively for the court, to be used as tableware: “Von nun ab darf der rote Serpentin nur für den Hof, für Tafelgeschirr verwendet werden”.

From the late-Renaissance, serpentine vessels with precious mountings formed desirable collector's items in the so-called ‘Kunstkammer’ or ‘Wunderkammer’ (‘curiosity cabinets’) of European monarchs and aristocrats. These cabinets of curiosities reflected the prevailing European taste for both natural and man-made wonders. Natural materials such as serpentine marble, shells or coconuts were enhanced with silver or silver-gilt mounts for display and to emphasise the rarity and value of these natural curiosities. As an object, this tankard embodies the idea of the Kunstkammer, since it combines a natural specimen with silversmith artistry and even believes bordering on either science or superstition. As such it unites a natural object with skilled artistry and knowledge. It should be remarked, that also the Siren-shaped thumbpiece fits within this notion, as the mythological figure of the Siren – who usually takes a half-human, half-animal form - symbolically bridges the divide between Nature and Culture.

Although often functional in appearance, objects within a cabinet of curiosities were primarily intended for delight rather than use. As European trade expanded in Asia, Africa and the Americas after 1600, exotic objects became less unusual. By the 1630s mounted cups could be found in households below the level of the nobility. They might be displayed with other treasures such as porcelain or collections of unmounted shells and coral.

However, silver mounted serpentine tankards of such a high quality as in the present piece may be considered as rare. More common are serpentine pieces which are either unmounted or mounted in pewter, but the present tankard was undoubtedly originally intended as an exceptional collector’s item. Serpentine with silver mounts was reserved for the collections of monarchs and the high nobility and were even presented as diplomatic gifts. Not all Saxon serpentine pieces were mounted by German silversmiths. Two examples with English silver mounts are kept in the collection of the Victoria & Albert Museum in London, which dated to around 1620. The same collection holds another tankard with a Saxon serpentine body, of which the silver mounting, dated ‘1643’, was possibly made in Sweden.

Even though silver mounted tankards with serpentine bodies were rare in Sweden, unmounted serpentine utilitarian artefacts such as bowls, plates and salt cellars appeared to have been popular in affluent Swedish households during the 17th century. For example, the Skokloster Castle in Sweden holds a collection of unmounted serpentine tableware, the largest group of 17th century serpentine objects that exist as a group, which was allegedly owned by the Swedish statesman and diplomat Fältmarskalk Carl Gustaf Wrangel (1613-1676).
The inside of the domed lid of the tankard is engraved with a coat of arms, previously falsely catalogued as that of the Schiller Family of Herden. It can be identified as that of the Austrian noble family Von Hagen. This coat of arms is listed in the Siebmachers Wappenbuch, published in Nuremberg in 1605, with an arrowhead pointing left in silver on a blue shield. The crest with the crown and three feathers are identical. This Von Hagen lineage was probably already extinct by the end of the 17th century.

As outlined in the above, the mounting of silver work on serpentine piece rarely occurred in Zöblitz itself. The turned serpentine tankards were sent on to important artistic centres such as Augsburg and Nuremberg where they were fitted with a precious mount. Most pieces, hoverer, were made by anonymous artists or are merely attributed. The impressive mounting of the present piece, however, was created by the Augsburg silversmith Matthäus I Seutter. He was born around 1574 and was active from 1602 onwards. Two years after his master's test, he joined the Silversmith’s Guild in 1604. He married in 1603 and died in Augsburg in 1632. His work mainly consists of humpen, tankards and jugs, most of which is gilded. 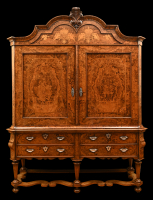