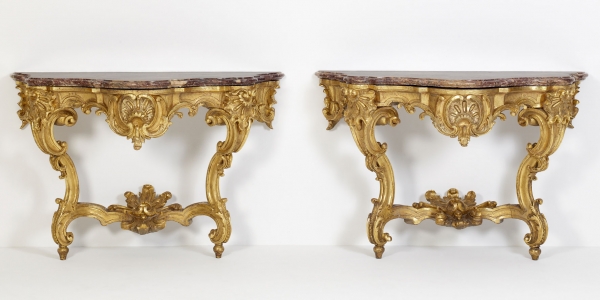 The console tables rest on two legs, composed of S- and C-volutes with a joint in between, also formed by volutes. A large palmette decorates the joint at the center. The frieze is features large rocaille-shapes at the top of the legs, a shell form in the middle and half palmettes on the sides. All of these connected with volute leaf motifs and band work. Legs and frieze are lavishly and exquisitely carved to form curled acanthus leaves, tendrils, drooping flower buds, beaded edges and lambrequins. The spaces between the band work of the frieze are filled with diamond motifs, reminiscent of those by French designers such as Berain and Marot from around 1700. However, above the table’s legs and the rocailles, with their fluid lines, rather point to the more modern spirit of the Rococo style. They are to be dated to the middle of the Régence period and it is precisely this mix of stylistic elements that makes these console tables so extraordinary. The fact that these pieces were made of oak suggests that they originated in Southwestern Germany.

A pair of 19th-century console tables from the Romanov-Württemberg family recently came onto the market. In terms of construction and the technique of the carving, the 19th-century set shows great similarities to the 18th-century pair shown here. The Romanov-Württemberg consoles, marked with a crowned ‘W’, possibly from the House of Württemberg, which became “royal” in 1805, can be regarded as freely interpreted copies of these 18th- century consoles. It is plausible that the 19th-century pieces were made for Sophia Dorothea of ​​Württemberg (1759-1828), Tsar Paul I of Russia’s wife, who as Tsarina was known as Maria Feodorovna. However, they also may have been produced for their daughter Catharine Pavlovna (1788-1819), whose second marriage was with her first cousin King William of Württemberg (1781-1864). This set of 18th-century console tables therefore possibly originates from one of the many houses of the Württemberg family to have later served as an example for a court craftsman. 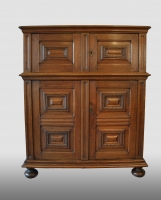