A rectangular tea table with a raised edge around the top. The top has a diamond veneer of tulipwood framed in a ribbon and ornaments of amaranth. The sides are decorated in a similar manner. The legs are veneered with amaranth and on the outer edge a fine ribbon of tulipwood. The elegantly curved and tapered legs end in sabots of gilt bronze. The table has a drawer over the full width of the front with gilt bronze handles and escutcheon. The fittings are decorated with rocailles. 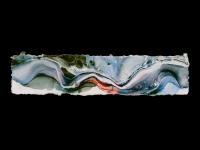