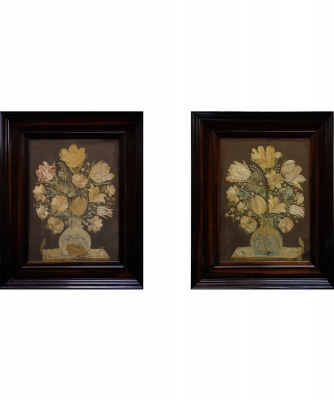 The bouquets of flowers, mostly tulips, are arranged in a pattern which is also known from the famous goldsmith Dirck van Rijswijck (1596-after 1679). The vases with decorative Chinese style show the same characteristics. The birds on the boards left and right are relatively too small, another point of similarity.

The frames of theembroideries are original and can be dated circa 1670, which is truly unique. The sizes of the panels are extremely large, because the very few similar embroideries from the 18th century are in most cases much smaller! Both works feature an unreadable monogram.

In the 18th century professional embroidery was a craft that was practiced almost exclusively by men. Only a few names of women practising this art are known: as Anna Maria Schuurman and the Roemer Visscher sisters. These were all intellectual and artistic women from the highest circles. Embroidery was in the 18th century an important status symbol, and a very time-consuming work.

The course of embroidery at an artistic level can best be compared to that of a painter. Embrioderer were also recorded as members of the Guild of St Luke, and "painting with the needle", or "acupictores" was widely executed. 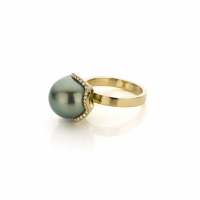 RIng with tahiti pearl and diamonds 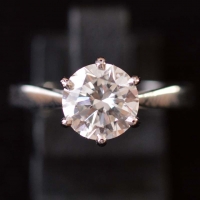 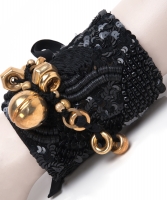 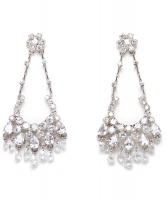