A Cavalier seated at a table smoking a Pipe, with an opened Tobacco Box, a Wineglass, a Flask and a pile of Playing Cards and Coins, with a Landscape beyond

Note
We are grateful to Dr. Otto Naumann for endorsing the attribution to Jan van Mieris. In addition, we are grateful to Mrs drs. Margreet Van der Hut BA for her help in cataloguing this painting.

This unpublished and previously unknown painting depicts a Cavalier, sitting at a table, wearing a feathered hat and a dark brown cloak over a light brown doublet with slashed sleeves, revealing the white shirt beneath, ending in a ruffled cuff. Around his neck he wears a lace collar. In his right hand he holds a clay 'Gouda pipe', on his left arm rests the hilt of a rapier. On the table in front of him lays an opened round copper tobacco box, next to it stands an empty wineglass. At the right stands a large Dutch glass ‘onion bottle’ with a deck of playing cards, some silver coins and an ace of clovers in front of it. Above the large bottle, a small black nail sticks out of the wall. To the left, behind a stone ledge decorated with a relief of putti, an extensive landscape with a sunset is depicted.

At first glance, this painting merely portrays a fictitious Cavalier, contently smoking a pipe. The red blush on his cheeks and the empty glass suggest that the man is a little drunk. Yet, genre painting from this period usually conceals a hidden message underneath what appears to be a scene from everyday life. This also seems to be the case in the present picture. The subject of a smoking man is often depicted in Dutch art. At the beginning of the seventeenth century smoking was still a novelty. Initially it was associated with the lower classes, but towards the end of the century smoking was accepted in higher classes as well. Jan van Mieris even depicted himself smoking in a self-portrait2 (see fig.1). But a smoking could also fulfil a symbolic function. The wine, tobacco and playing cards already hint on pleasure and amusement. Yet there are less obvious symbols of profligacy as well. The pipe, for instance, can refer to the abolishment of morals3, or indicate adultery or a brothel scene. The putto on the relief might even represent Amor, the assistant of Venus, the Goddess of Love. Crucial is the prominently placed empty glass. This seemingly insignificant object reminds the observer of the fragility of life, the transitoriness of pleasure and the meaninglessness of earthly life, giving this picture a hidden Vanitas theme4.

Jan van Mieris (sometimes referred to as ‘Johannes’)6 was born on 17 June 1660 as the eldest son of the renowned artist Frans van Mieris the Elder (Leiden, 1635 - 1681). He learned the art of painting from his father and some sources state that he was a pupil of Gerard de Lairesse (Liège, 1640/41 - Amsterdam, 1711) 7. According to Van Gool, however, Frans van Mieris initially intended his son to study with Lairesse, but was dissuaded by the latter's dissolute lifestyle and therefore decided to continue to teach his son himself8.

Though it is not known with certainty with whom Jan van Mieris studied, it is a fact that he belonged to a famed and influential family of Dutch genre and portrait painters, of whom his father, Frans van Mieris the Elder, was the most important. He was the son of a goldsmith and a pupil of Gerrit Dou (Leiden, 1613 - 1675). Alongside his master, he is considered one of the most important members of the ‘Leidse fijnschilders’, the ‘Leiden fine painters’9. His tiny, meticulous and highly-polished paintings won him distinguished patrons and a lucrative practice. Frans van Mieris excelled in the rendering of texture and was an admirable portraitist10. Both his sons, Jan van Mieris and Willem van Mieris, (Leiden, 1662 - 1747) and his many pupils continued his tradition. The well-known art collector Petronella de la Court (Leiden, 1624 - Amsterdam, 1707) owned four paintings by Frans van Mieris, and acted as ‘maecenas’ (or patron) to both Jan and Willem van Mieris11.

From the records of his life, Jan van Mieris appears to be a rather tragic figure. Already in his youth, various sicknesses impeded him in the progress of his studies. His physical condition remained very weak during his life, often causing inability to work12. Jan was only twenty years old when his famous father died, leaving him with the care for both the Van Mieris household and the workshop. This must have had a great impact on the young artist. Jan was not only active as a painter, but also a poet. He translated the play Aminta by the Italian poet Torquato Tasso and wrote several poems. Three of these poems concern his father: one is about his father’s painting The Old Lover 13 and in two other poems Jan mourns his father's death. These poems and the translation of the play are part of a manuscript kept in the University Library in Leiden, the Netherlands14.

Jan became a member of the Leiden Guild of St Luke in 1686, for which he paid the entrance fee on 14 June15. Some records state that he travelled to Germany in 1686 or possibly in 1687. Sluijter states that in 1688 he set out for Italy. From a letter to his mother we know that Jan failed to find purchasers for his works in Venice. In Florence the fame of his father's merit procured him a most honourable reception from Cosimo III de' Medici, Grand Duke of Tuscany (Florence, 1642 - 1723). Some sources, of which Van Gool appears to be the oldest, state that Jan turned away this invitation on religious grounds, since he was not able to “unite his consciousness with the faith of the Court” 16. He then proceeded to Rome. In that city his malady increased, yet, during the intervals of ease, he continued to work with his usual application, until succumbing to the acuteness of his sufferings on 17 March 1690.

Unfortunately only a few works by Jan van Mieris are known. Those that survive show that he was a talented painter whose style resembles that of his father's later work17. As outlined above, Jan spent his youth working in Leiden where he was trained by his father Frans van Mieris, who is considered to be one of the most important representatives of the Leiden ‘fine painters’. The influence of his father’s work cannot be underestimated as the young Van Mieris followed the technique and subject matter of his father’s later paintings, which display the same enamel-like smoothness, harsh reflections of light and an emphatic display of virtuosity in the rendering of detail and figures.

Jan van Mieris painted principally genre scenes and subjects developed by his father and the previous generation of Leiden ‘fine painters’. Unlike his father, however, he also explored history painting, including religious scenes18 and mythological themes19. As outlined above, some records state that Jan van Mieris was a pupil of Gerard de Lairesse. De Lairesse worked in an academic and classical style of decorative painting and favoured subjects from Classical mythology or allegories. Jan van Mieris’ painting Minerva as Patron of the Arts, 20 is clearly different in subject, size and style from the works by his father and clearly demonstrates influences of the history painting in the opulent Classical Baroque style of De Lairesse.

In the eighteenth century some of the works by Jan van Mieris appear to have been in very renowned collections. Historical sources record that in the eighteenth century a surprisingly large number of the works by Jan van Mieris were in very renowned art collections. Van Gool states that the famous ‘Cabinet ’ of De la Court in Leiden encompassed two or three works by Jan and that Johan Aegidiuszn. van der Marck (Leiden, 1701 - 1772), the later Burgomaster and renowned art collector, owned a self-portrait by Jan van Mieris21. Van der Aa states that when the art collection of Pieter de la Court Van Der Voort (Leiden, 1664 - 1739) was auctioned, the sale included no less than eight paintings by Jan van Mieris. As Van Gool, he also refers to the self-portrait in the Van der Marck collection, that was auctioned together with the rest of the illustrious art collection at the ‘Oudezijds Herenlogement’ in Amsterdam by De Winter & Yver on 23 August 1773 as lot No. 42822 23. Recent archive research by Van der Hut has pointed out that the collection of Petronella de la Court encompassed eleven works by Jan, the collection of Pieter de la Court van der Voort no less than five, in addition to three portraits in the collection of the related Backer family. The Van der Marck collection possessed four works, which were directly obtained from both De la Court collections, and three of his drawings. Van der Hut remarks that it is rather extraordinary that Jan’s works appeared in the above mentioned collections in relatively large numbers, yet are virtuously untraceable at present24. By the nineteenth century Jan van Mieris’ work had already become quite rare. In reference to the ‘Historical exhibition’ in Amsterdam in 1876, De Vries remarks that works by Jan van Mieris are rare, but that his talent equals that of his famous family members25. At present, his works are mainly kept in museum collection and rarely appear on the art market, making this unpublished and previously unknown work an interesting addition to the heritage of Jan van Mieris. 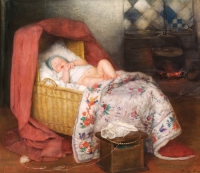 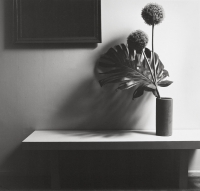