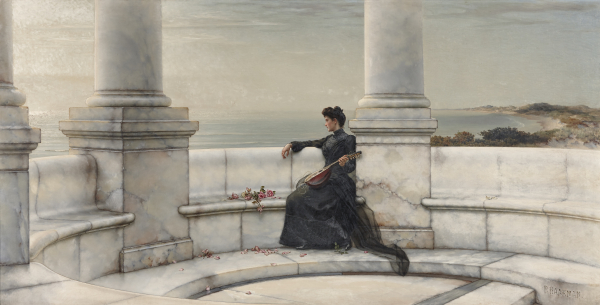 Pieter Haaxman was a Dutch painter who attended the Academy of Arts in The Hague and was a member of the Pulchri Studio, The Hague, and Arti et Amicitae in Amsterdam. He was a student of Herman ten Kate (Dutch, 1822-1891) who was mostly known for his genre pieces and interiors. Haaxman painted genre pieces as well, but also created a few paintings with a more classical outlook, such as this one.

Pieter Haaxman is also known for his miniatures and he was commissioned by Queen Emma and Queen Wilhelmina of The Netherlands to paint their portraits. Other works by Haaxman are part of the collections of the Rijksmuseum, Amsterdam, the Kunstmuseum, The Hague and Boijmans van Beuningen, Rotterdam.

This painting is considered to be one of Haaxman’s masterpieces. This masterpiece shows us a woman sitting on a classical marble bench gazing off into the distance, daydreaming. Next to her lie a couple of roses with petals scattered on the floor. In her left hand she is holding a mandolin. The strings of the mandolin are broken. The lady is unable to accompany herself as she daydreams.
In the background the sun is glittering on the sea with on the right a lush green shore.